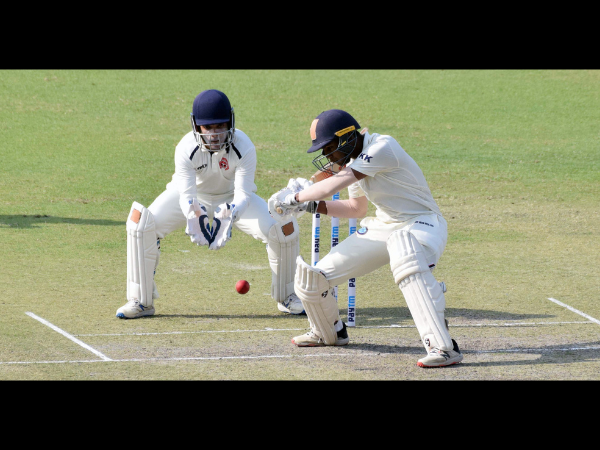 A scene from a Ranji Trophy match in India. (ANI Photo)

THE Board of Control for Cricket in India (BCCI) has said that the decision review system (DRS) will not be available for this year’s Ranji Trophy final, which is currently underway between Mumbai and Madhya Pradesh at the M Chinnaswamy Stadium in Bengaluru in the southern state of Karnataka.

Several media houses in the country quoted an official of the cricket’s governing body along with another source and they threw light on why the final of the country’s premier domestic tournament doesn’t have a DRS system in place.

The Quint quoted a BCCI official who said that the Indian board believes in the credibility of its umpires.

“We believe in our umpires. India’s two best umpires are officiating in this game. It’s time we trusted our umpires,” he said. KN Ananthapadmanabhan and Virender Sharma – both seasoned umpires – are officiating in the match. However, when these same umpires do their duty in an international or Indian Premier League (IPL) match, the DRS system is still used and nobody says that the umpires are not believable.

The official also said that it’s expensive to use the DRS but then, it was just a few days ago that the cricketing body sold the rights of the 2023-27 cycle of the IPL for a whopping Rs 44,075 crore (£4.5 billion), which is almost three times the price of the 2018-22 cycle.

Twitter was abuzz after hearing the BCCI say that starting the DRS system in Ranji Trophy is an expensive process. Funny reactions and memes flooded the platform as people questioned how the world’s richest cricket board could give such an excuse:

BCCI can’t afford DRS in the Final of Ranji

And IPL fans have just one reason of money money to hype IPL
What is use of this Money https://t.co/cICxQHsaJK

No DRS in Ranji Trophy because it is expensive – BCCI pic.twitter.com/6VD7xMahec

The BCCI didn’t have DRS in the Ranji Trophy Final because it’s too expensive. But have it for the IPL…. hmmmm strange. Just another bullshit excuse for a pathetic and weak board

The richest cricket board can’t afford DRS..irony at is best @BCCI @BCCIdomestic

The umpiring standards are very very low in Ranji knockouts @BCCI @BCCIdomestic #MPvsBEN ..There should be DRS in Ranji trophy🏆 knockouts