Indian Equities Continue To Crumble Under Weight Of Economic Worries 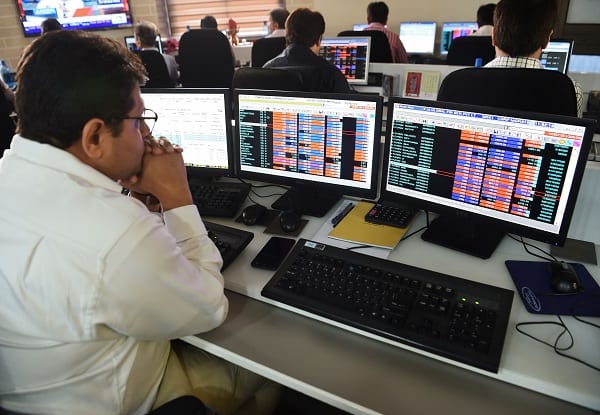 On the other hand, Yes Bank surged about 33 per cent on Thursday after five consecutive days of fall after the bank said its financials are strong, with the liquidity position well in excess of regulatory requirements (Photo: INDRANIL MUKHERJEE/AFP/Getty Images).

INDIAN equities continued to reel under selling pressure for a fourth straight session on Thursday as GST shortfall, financial sector woes and renewed concerns over global trade presented a cocktail of worries for investors.

The benchmark indices -Sensex and Nifty were pulled down mainly by losses in metal and banking stocks.

Globally, markets came under an immense pressure after the United States said it would impose new tariffs on European goods, triggering worries for the already global economy.
Besides, a series of negative headlines in the Indian banking and financial sector have been playing in the minds of investors, pulling the benchmark indices down for the past couple of sessions.

On the Sensex chart, Vedanta was the biggest loser with 4.66 per cent decline. Other major laggards were were Tata Steel, IndusInd Bank, HDFC Bank, Kotak Bank, Axis Bank, HUL and Bharti Airtel, losing up to 3.36 per cent.

On the other hand, Yes Bank surged about 33 per cent on Thursday after five consecutive days of fall after the bank said its financials are strong, with the liquidity position well in excess of regulatory requirements.

Others top gainers were Tata Motors, ITC, HCL Tech PowerGrid, and M&M, gaining up to 6.16 per cent.

The rupee rose 20 paise to settle at 70.90 against the American currency on Thursday.

Asian markets were down amid concerns over the US opening a new front in its trade war.
The Goods and Services Tax (GST) collections dropped sharply to a 19-month low of Rs 919.16 billion in September, mirroring a widening slowdown in economy triggered by shrinking consumer demand.

A caution prevails among investors amid a deepening crisis at Punjab and Maharashtra Co-operative Bank (PMC) and fraud allegations against companies like Indiabulls Housing Finance Ltd (IHFL).

In further worries for the Indian economy, the eight-core industries in August contracted to over three-and-a-half year low of 0.5 per cent, due to decline in output of coal, crude oil, natural gas, cement, and electricity.

The Reserve Bank of India (RBI) is scheduled to announce the fourth bi-monthly monetary policy for 2019-20 on Friday, after a three-day meeting.

The RBI is likely to go for yet another rate cut on Friday, the fifth in a row, as inflation is within the comfort zone and the need to boost the economy is pressing.

In the last few weeks, the government has come out with a series of measures including steepest cut in corporate tax, rollback of enhanced surcharge on Foreign Portfolio Investors, among others to jump-start growth which hit a six-year low of five per cent during the first quarter of the current fiscal.