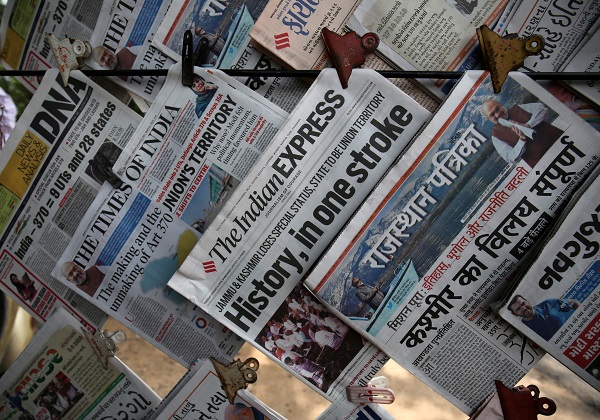 Newspapers, with headlines about prime minister Narendra Modi’s decision to revoke special status for the disputed Kashmir region, are displayed for sale at a pavement in Ahmedabad, India, August 6, 2019 (Photo: REUTERS/Amit Dave).

INDIAN prime minister Narendra Modi’s decision to revoke special status for the Kashmir region is a bold gamble to end a three-decades-old armed revolt and draw the territory closer to the rest of India, the country’s media said on Tuesday (6).

The Indian government on Monday (5) scrapped a constitutional provision that allowed the Muslim majority state of Jammu and Kashmir to make its own laws and barred non-residents from buying property there.

“History, in one stroke,” ran a front-page headline in the Indian Express newspaper after the biggest political move in nearly 70 years in one of the world’s most militarised regions.

“Mission Kashmir Accomplished: In one swift stroke, India gets special status in state,” The Economic Times said on its front page.

Modi’s ruling Bharatiya Janata Party (BJP) has long advocated for an end to Kashmir’s special status, saying it hindered the region’s development and spurred young people to join the insurgency against Indian rule.

But no government has tried to change the autonomy granted to Kashmir after it acceded to India in 1947, fearing more violence in a region where tens of thousands of people have died in the insurgency.

“BJP’s Kashmir move is bold, but has risks,” the Hindustan Times newspaper said in its editorial, adding that the government must now reach out to Kashmiris.

The government gave no prior warning that it planned to withdraw Kashmir’s special status and divide the state into two federally-administered territories.

“PARTITION of minds and a state. This time by the largest democracy on the planet, without asking J&K”,” The Telegraph newspaper said on its front page.

The measure is likely to provoke a backlash in the region, where hours before Monday’s decision Indian authorities arrested local leaders and cut off mobile, internet and cable television networks in a bid to prevent protests.

“The government has a responsibility to ensure security in Kashmir, but that means respecting the human rights of everyone, including protesters,” said Meenakshi Ganguly, South Asia director at Human Rights Watch.

“The government got off to a bad start by detaining political leaders, banning public meetings, and shutting down the internet,” she added.

“There are times in the history of a republic when it reduces itself to a jackboot. Nothing more and nothing less. We are witnessing that moment in Kashmir,” Mehta wrote in an opinion piece for the Indian Express.