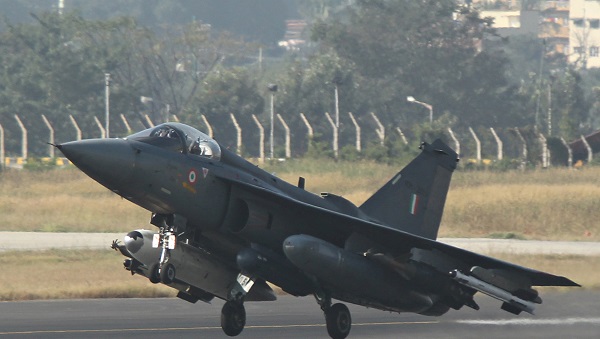 The Russian-origin transport aircraft, with 13 people on board, went missing Monday (3) afternoon around 33 minutes after taking off from Jorhat in Assam for Menchuka near the border with China (Photo: STRDEL/AFP/Getty Images).

A LONG-RANGE maritime reconnaissance aircraft of Indian Navy was deployed on Tuesday (4) as part of a massive search operation to trace an AN-32 transport aircraft of the Indian Air Force, a day after it went missing around thickly-forested Menchuka in Arunachal Pradesh, officials said.

The Russian-origin transport aircraft, with 13 people on board, went missing Monday (3) afternoon around 33 minutes after taking off from Jorhat in Assam for Menchuka near the border with China.

Navy Spokesperson Captain D K Sharma said the P8i aircraft took off from INS Rajali in Tamil Nadu’s Arakonam around 01.00 PM local time to join the search and rescue operation to trace the missing AN-32.

Already a fleet of fixed-wing aircraft and choppers were deployed to locate the missing Antonov AN-32 aircraft in the mountainous terrain in and around Menchuka, officials said.
They said ground troops have also been deployed to carry out a search operation.

Captain Sharma said the P8i aircraft will carry out search operation with electro-optical and Infra-Red sensors.

“The P8i aircraft has a very powerful Synthetic Aperture Radar which shall be utilised during the SAR sweeps to locate the missing,” he tweeted.

The P-8I, manufactured by Boeing, is a long-range maritime reconnaissance aircraft, and at present, Navy has eight of them.

The IAF on Monday said the aircraft took off from Jorhat at 12.27 pm for the Menchuka advance landing ground in Shi-Yomi district in Arunachal Pradesh, and its last contact with the ground control was at 01.00 PM local time.

“Some ground reports were received on the possible location of a crash site. Helicopters were routed to the location, however, no wreckage has been sighted so far,” the IAF said in a statement on Monday.

It said a total of eight aircrews and five passengers were on board the aircraft and that the IAF is coordinating with Indian Army as well as various government and civil agencies to locate the missing aircraft.

The IAF has deployed C-130J and AN-32 aircraft besides two Mi-17 choppers while the Indian Army has pressed into service advance light helicopters to locate the missing Antonov AN-32 aircraft.

The AN-32 is a Russian origin aircraft and the IAF currently operates a sizeable number of it. It is a twin-engine turboprop transport aircraft.

An AN-32 aircraft had crashed near a village in West Siang district of Arunachal Pradesh in June 2009 in which 13 defence personnel were killed.

The aircraft had crashed over the Rinchi Hill above Heyo village, about 30 km from Mechuka advance landing ground.

In July 2016, an AN-32 aircraft went missing while taking off from Chennai for Port Blair with 29 people on board.

The aircraft could not be traced following weeks of massive search operations covering 2,17,800 square nautical miles by multiple aircraft.

Months later, an IAF court of inquiry concluded that it was unlikely that the missing personnel on board the aircraft would have survived the accident.