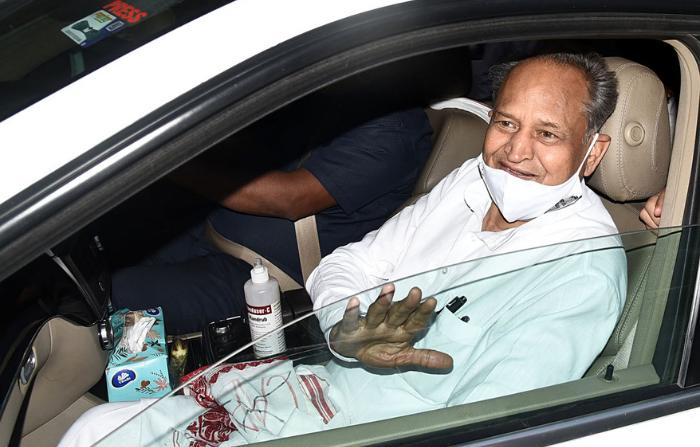 Here are news in brief related to Indian politics for Friday, September 23, 2022:

Rajasthan chief minister Ashok Gehlot became the first person to announce his candidature for the All India Congress Committee (AICC) presidential poll on Friday, a day before the nomination process begins, and said former party president Rahul Gandhi has told him that no one from the Gandhi family should become the next party chief, Press Trust of India reported. He also said the call on his successor to head the Rajasthan government will be taken by the party’s interim president, Sonia Gandhi, and the Congress’s Rajasthan in-charge, Ajay Maken. Gehlot’s remarks came a day after Rahul Gandhi batted for the “one-man, one-post” concept in the party, in line with the Chintan Shivir reforms earlier this year.

Taking on Bihar chief minister Nitish Kumar in the first ever rally since BJP’s split with Janata Dal (United) in Bihar, Indian home minister Amit Shah on Friday addressed the ‘Jan Bhavna Mahasabha’ rally said that the people of the state will “wipe out the Lalu-Nitish duo” in the 2024 general elections and the party will come to power here in the state in 2025. Addressing the ‘Jana Bhavna Mahasabha’ in Bihar’s Purnea, Shah said, “In 2014, you (Bihar CM Nitish Kumar) only had two Lok Sabha seats, ‘naa ghar ke rahe the, naa ghaat ke‘ (you belonged to nowhere). Let the 2024 LS elections come, the Bihar public will wipe out the Lalu-Nitish duo. We’re, with a full majority, going to come to power here in 2025 polls. Bihar public gave you (CM Nitish Kumar) the benefit of the doubt for long, now they know that neither Lalu’s party nor your party will come this time. Only PM Modi’s lotus will bloom in Bihar this time,” he added. Shah said Kumar does not favour any political ideology, and can join hands with any party to stay in power.

A day after Indian National Congress leader Gourav Vallabh taunted senior party parliamentarian Shashi Tharoor over his probable AICC president poll bid, the party on Friday urged all its spokespersons and communication department office bearers to refrain from commenting on any colleague contesting the elections, PTI reported. In the first indicator of leaders taking sides in the upcoming contest for the top post, Vallabh had also voiced support for another contender, Rajasthan chief minister Ashok Gehlot, who many believe has the backing of the current leadership.

The Bombay High Court on Friday granted permission to the Uddhav Thackeray-led Shiv Sena to hold its annual Dussehra rally at the iconic Shivaji Park ground in central Mumbai on October 5, PTI reported. The venue, where the Sena had been holding its Dussehra rally year after year, got embroiled in a legal battle after the rival faction led by Maharashtra chief minister Eknath Shinde too applied for holding its rally there on the same day. A division bench of Justices R D Dhanuka and Kamal Khata said the Brihanmumbai Municipal Corporation’s decision not to grant permission to either faction was a “clear abuse of the process of law.” The Thackeray faction had challenged the BMC order before the court. “In our view, the BMC decision was not bona fide (in good faith). The petitioner has been granted permission to hold the Dussehra rally at the Shivaji Park in the past,” it noted.

Punjab Bharatiya Janata Party (BJP) chief Ashwani Sharma met former chief minister of Punjab Amarinder Singh, who recently joined the party and also merged his Punjab Lok Congress (PLC) with it, Asian News International reported. Singh formally joined the BJP on Monday at the party headquarters in presence of central ministers Narendra Singh Tomar and Kiren Rijiju. Calling it a courtesy meet, Sharma said, “I came here today to talk about the current political situation in Punjab with Captain Amarinder Singh as he has a rich political experience. I have invited Captain Amarinder Singh to come to the party office. Soon, Capt Amarinder Singh will come to the party office and will be visiting every district in the state. There is a lot of experience Captain Amarinder Singh has as he has been the chief minister for a long time, he understands Punjab, and it is natural that BJP will benefit from his arrival,” Sharma added.