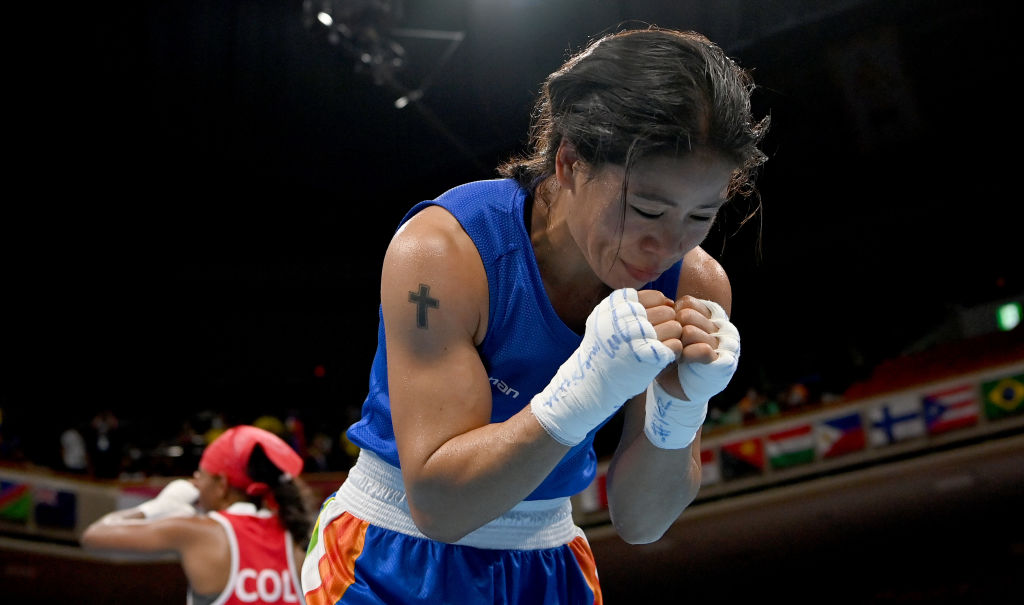 MC MARY Kom’s dream to win a second Olympic medal was over on Thursday (29) when she lost to Colombia’s Ingrit Valencia in the pre-quarter finals of the women’s flyweight category at Tokyo Olympics. The 38-year-old, who won a bronze medal at the London Games in 2012, lost to the third-seed via split decision in a close contest bout.

Kom won hearts after her defeat when she gracefully accepted the defeat at the Kokugikan Arena. It was probably her last appearance at the mega event and the mother of four gave it all in a bid to win her second medal.

Kom, who lost to the Colombian opponent for the first time, did not have the best of beginnings to the match as Valencia went on the offensive from the word go. The 32-year-old pushed the Indian boxer on the back foot early and won the first round 4-1.

But Kom made a quick return and a smart display featuring scoring punches and swaying away saw her clinching the second round 3-2.

The Indian looked visibly tired in the third round and despite going for the kill in what was a high-quality bout, she could not finish it off.

The Indian boxer, who failed to qualify for the Rio Games five years ago, renewed her fans’ hopes by winning gold at the World Championships in 2018 and bronze at the same tournament next year.

She also won silver at the Asian Championships in May this year after returning to action following the pandemic, giving hopes to her fans about yet another Olympic medal.

Last Sunday (25), Kom was seen embracing Mirabai Chanu, who has won India’s only medal at this Olympic so far — a silver in weightlifting. Like Kom, Chanu also hails from Manipur.

Congratulations @mirabai_chanu . Emotional and happy to embrace each other. A proud Manipuri and a fighter for India in one frame. @NBirenSingh pic.twitter.com/5qrfbDervF