India’s Heartland States Vote In Fifth Round Of Elections 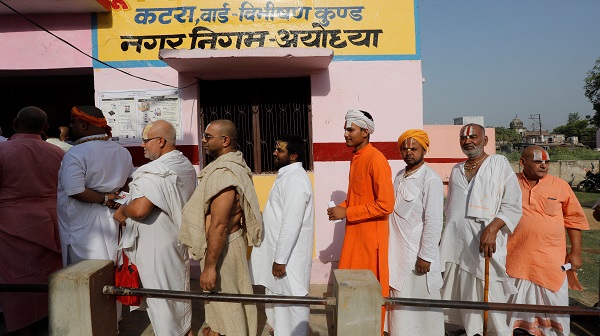 Hindu holy men stand in a queue outside a polling station to caste their vote during the fifth phase of the general election in Ayodhya, India May 6, 2019 (Photo: REUTERS/Pawan Kumar).

INDIA’S northern heartland voted today (6) in the fifth phase of a staggered general election, with prime minister Narendra Modi hoping his record on national security will win him a second five-year term.

More than 87 million people across seven states are eligible to vote in this phase, which includes some of the country’s most electorally important regions such as Uttar Pradesh, the state with the most members of parliament.

Analysts say Modi’s nationalist rhetoric has resonated deeply in the north. The BJP swept to power in 2014 with an overwhelming majority based largely on its strength in northern states.

The party has run a campaign highlighting Modi’s tough stand against rival Pakistan following a suicide bomb attack by a Pakistan-based militant group that killed 40 Indian paramilitary police in the disputed northern region of Kashmir in February.

Party members have also been accused of playing on communal tension, in particular between majority Hindus and minority Muslims, in Uttar Pradesh.

The BJP enjoys the support of several right-wing groups that want to see the party keep a promise to build a temple on the ruins of a 16th-century mosque in Uttar Pradesh’s Ayodhya city- a flashpoint in tensions with minority Muslims.

“The main issues here are the temple, nationalism and the country’s economic development,” said Sharad Sharma, an Ayodhya-based spokesman for the Vishwa Hindu Parishad, or the World Hindu Council, a group linked to the BJP.

Modi’s focus on national security in the election, which began on April 11, has helped him shift many voters’ attention away from unemployment and a weak agrarian economy that have led to extensive farmer protests.

“We only want Modi,” said 73-year-old Roshan Lal Sharma, voting in Jaipur city in the northwestern state of Rajasthan.

But Paresh Sorathiya, a 28-year-old software engineer voting in Jaipur, said unemployment and low pay for graduates were major issues for him.

“The government needs to focus on jobs,” Sorathiya said.

Voting was marred by violence in the northern Muslim-majority region of Kashmir, where Muslim separatists have been fighting the security forces for decades.

The separatists called for a boycott and only a trickle of voters showed up – just over one per cent by mid-day, an election official said.

Protesters threw stones at polling stations and at least one person was shot and wounded when police opened fire, police in Kashmir said.

Hundreds of extra troops have been deployed in Kashmir for the vote and polling staff and equipment was airlifted in.

Gilles Verniers, a political science professor at Ashoka University, said campaigning would be bitter in the run-up to the seventh and last phase of voting on May 19.

“It is reflective of the nervousness of political parties,” Verniers said.

“Every party and the incumbent in particular will try to maximize anything they think will play to their advantage.”