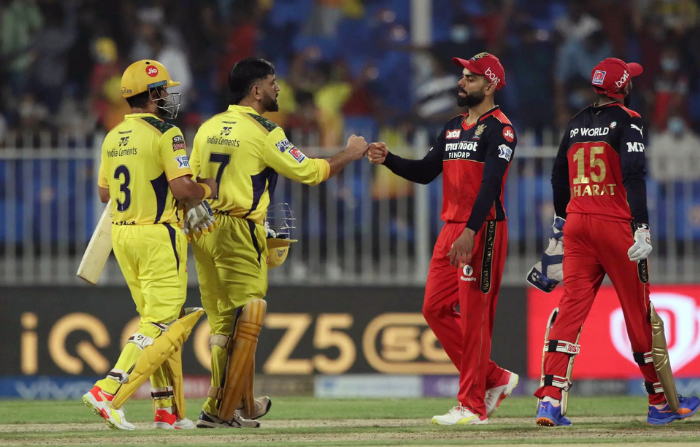 Mahendra Singh Dhoni and Virat Kohli greet each other after a game in the Indian Premier League 2021 in the UAE. (ANI Photo)

A TOTAL of 27 players were retained by the eight existing franchises (two new teams to join next year) of the Indian Premier League (IPL) as the deadline for the retention of the players for the 2022 edition ended on Tuesday (30). The franchises spent Rs 269 crore (£27 million) to hold on to these players that include 19 Indians, four of whom are uncapped.

The list also missed some big names and quite a few of them opted to get released so that they could go back to the auction pool. There was a cap of four players that each franchise could retain.

Here is a look at the players that the teams have retained and the major ones released:

Kolkata retained: Andre Russell, Varun Chakravarthy, Venkatesh Iyer, Sunil Narine. The major names that the 2021 runners-up released are Eoin Morgan who captained the side for a season and half (he replaced Dinesh Karthik midway in the 2020 season), Shubman Gill, Karthik and Lockie Ferguson.

Bangalore retained: Virat Kohli who stepped down as the captain this season, Glenn Maxwell and Mohammed Siraj. The big names that the franchise released are Devdutt Padikkal, Harshal Patel and Yuzvendra Chahal.