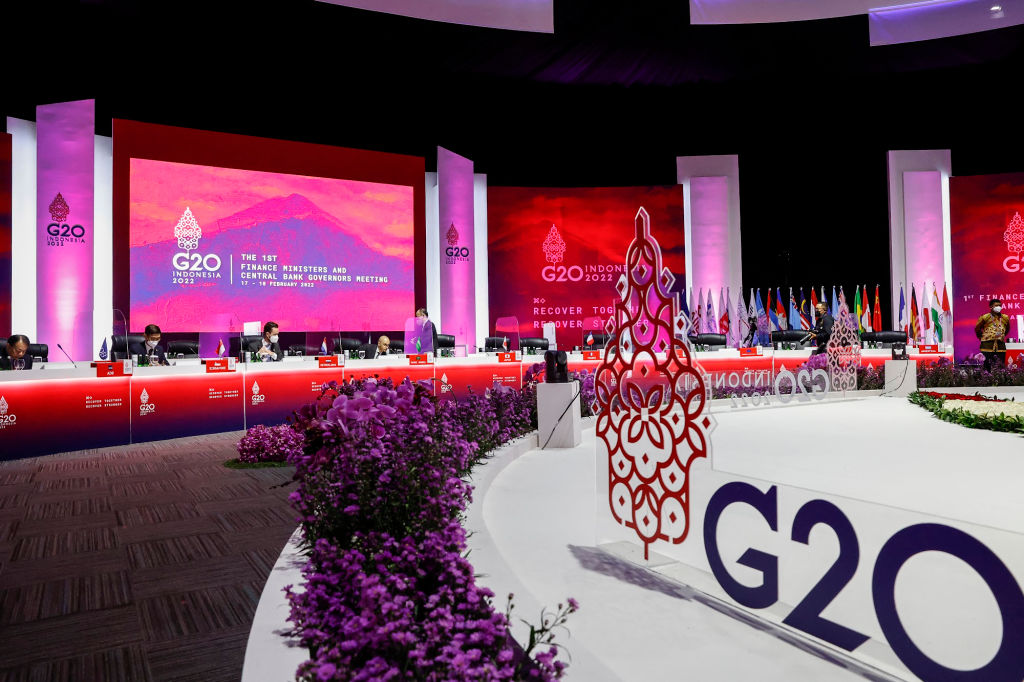 Head of delegates prepare for a meeting on the last day of the G20 finance ministers and central bank governors meeting in Jakarta on February 18, 2022. (Photo by MAST IRHAM/POOL/AFP via Getty Images)

GROUP of 20 foreign ministers travelled to the resort island of Bali in Indonesia this week for a meeting which has been overshadowed by war in Ukraine, where Russia’s presence has caused divisions in the bloc as host Indonesia tries to mediate.

The G-20 includes Western countries that have accused Moscow of committing war crimes in Ukraine and have imposed sanctions on it, as well as countries such as China, Indonesia, India and South Africa that have not followed suit.

It will be the first time foreign ministers from some of the world’s largest economies have met with Russian foreign minister Sergei Lavrov since Russia invaded Ukraine in February.

Speaking ahead of the G20 meeting, which runs from Thursday (7) to Friday (8), German foreign ministry spokesman Christian Wagner said it would not be a “normal summit” and “business as usual”.

He said Germany holds the presidency of the Group of Seven industrialized nations and will coordinate in Bali on how to respond to Lavrov in light of the war in Ukraine.

Senior officials from Britain, Canada and the United States pulled out of Russian representatives at a G20 financial meeting in Washington in April. Read more

A US State Department spokesperson said US Secretary of State Anthony Blinken would be an active participant in the meeting while also “remaining true to another plus objective, which is the fact that it cannot be business as usual with the Russian Federation”. .

Blinken will meet with Chinese Foreign Minister Wang Yi in Bali, but a meeting with Lavrov is not expected. Read more

As chair of the G20 this year, Indonesia has been caught in the middle of a geopolitical storm due to the war, trying to fend off threats by Western countries to boycott the meetings. After the foreign ministers meeting, the G20 finance ministers are scheduled to meet next week in Bali as well.

The president, widely known as Jokowi, has invited Ukraine to attend the G20 this year, tried to persuade Russia to end a blockade of grain exports that is leading to a global food crisis, and presented Indonesia as a “diplomatic bridge” between nations.

Ukraine’s ambassador to Indonesia, Vasyl Hamyanin, said that his country’s foreign minister will deliver a hypothetical speech at the Bali meeting.

Despite early talk of rejecting some G-20 meetings, Western leaders eventually decided that giving up the floor to Russia would be counterproductive, said Max Bergmann, an expert on Russia and Europe and a former US state department official.

Ramin Tolui, US assistant secretary of state for economic and trade affairs, said on Tuesday (5) that food and energy would feature prominently in the meeting. Read more

“The G20 countries should hold Russia accountable and insist on its support for the ongoing UN efforts to reopen sea lanes for grain delivery,” he said.

During a visit to Vietnam on Wednesday (6), Russia’s Lavrov called on all parties in the world to make efforts to protect international laws because “the world is developing in a complex way.”

His comments before his arrival in Bali come as Western countries accuse Russia of violating international law by invading Ukraine, which Moscow describes as a “special operation”.

The reaction to Lavrov in Bali could also provide an indication of how G20 members would respond if Putin attended the group’s November summit meeting in person, which has yet to be confirmed.

Murray Hebert, a Southeast Asia expert at CSIS, said the Indonesian president, who has not usually been active on foreign policy issues, has come to see his handling of the group’s presidency as a defining moment in his presidency.

“Jokowi very much hopes to avoid a diplomatic train crash if Putin appears in November,” he said.