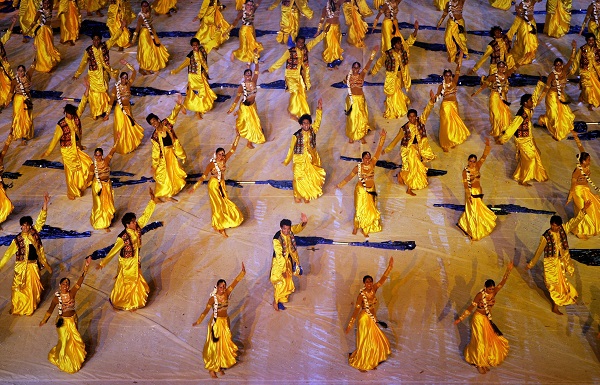 “People here think South is so good (in making films) and we think what great films Bollywood is making. It is a beautiful phase where there is an exchange of ideas, thoughts. It is the beginning of a beautiful era,” Sudeep, who turned 46 on Monday (2), said (Photo: Adam Pretty/Getty Images).

KANNADA film star Kichcha Sudeep, who is gearing up for the release of “Pehlwaan”, believes audiences are now willing to watch great content from across the globe.

Lately, a lot of Bollywood and south film stars are working in Hindi or in south language films. Akshay Kumar was seen as a villain in Rajnikanth’s “2.0”, while “Baahubalu” star Prabhas recently appeared in a multi-lingual film like “Saaho”.

And Sudeep said this cultural exchange is good for cinema.

“People here think South is so good (in making films) and we think what great films Bollywood is making. It is a beautiful phase where there is an exchange of ideas, thoughts. It is the beginning of a beautiful era,” Sudeep, who turned 46 on Monday (2), said.

“Viewers across the country and globe are welcoming content from different languages. Earlier there used to be a problem of skin and accent but today it is not there. People have grown. There is a difference in their mentality. Now there is no divide of borders,” he added.

In Kannada film industry, Sudeep is one of the biggest stars, but the actor said he never lets the fame get to his head and treats it like a motivation to work harder.

“I know my films got me here so my concentration is on doing great films and getting great scripts. I have no inhibitions.

“My fans are there because of my work, because of the films that I did. They are my assets. Fans are there, but they should not become my arrogance. My fans do guarantee me a good opening on the day my film releases. So the responsibility is more on me on doing quality work,” he said.

In “Pehlwaan”, Sudeep will be seen playing the role of a boxer and Suneil Shetty features as his mentor. To get the toned body and fierce look, the actor underwent physical transformation.

Citing an example of Bollywood action stars like Tiger Shroff, Hrithik Roshan, Sudeep said, “Here you have very strong heroes. We are hardly ten per cent of what they are. This film is a big opportunity as an actor.

“It was a big challenge for me. I had to eat diet food, everything was calculated and measured. I have three looks in the film – bulk, lean and the transformation, I was 84-85 kg, I had to come down to 73-74 kg.”

The actor said initially he was scared about how the audiences will react to his look as a boxer.

“Even though people are observing or talking about my look in the film in a good way but in the beginning, I did feel a bit embarrassed. This is worst then being dressed, you need to be perfect. The embarrassment was scary.

“Salman Khan has been into fitness for a long time and if he can feel like that in ‘Sultan’ then what I am? I did have my fears. I was scared initially,” Sudeep

“Pehlwaan”, directed by S Krishna, is slated to release in Kannada, Hindi, Telugu, Malayalam and Tamil on September 12.