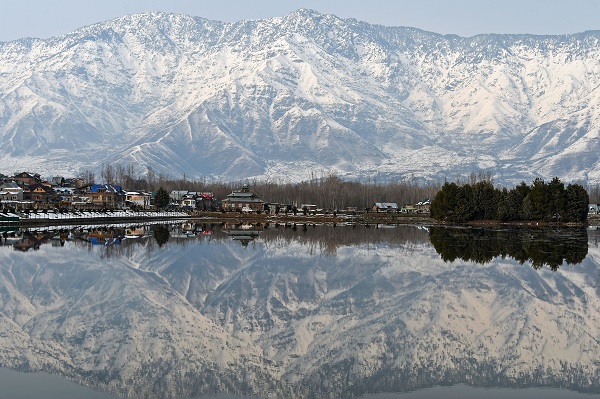 The state flag, which is red in colour with three equidistant white vertical strips and a white plough, represents the bloodshed from the Kashmir agitation in July 13, 1931. Jammu and Kashmir was permitted to fly its own flag along with the national flag under Article 370 (Photo: TAUSEEF MUSTAFA/AFP/Getty Images).

AS the Indian government revoked provisions of Article 370 that gave special status to Jammu and Kashmir, the official state flag will soon be permanently removed.

As per reports, the official state flag is still seen hoisted along with the tricolour at the Civil Secretariat building in Srinagar.

The state flag, which is red in colour with three equidistant white vertical strips and a white plough, represents the bloodshed from the Kashmir agitation in July 13, 1931. Jammu and Kashmir was permitted to fly its own flag along with the national flag under Article 370.
Parliament approved a resolution abrogating special status to Jammu and Kashmir under Article 370 of the Constitution and a bill for splitting the state into two union territories.

Jammu and Kashmir Assembly Speaker Nirmal Singh became the first Constituent authority to remove the state flag from his official vehicle on Tuesday.

“I have removed the state flag from my official vehicle yesterday soon after scrapping of Article 370,” Singh, who was the deputy chief minister in the Peoples Democratic Party-Bharatiya Janata Party government, told.

He said notification is likely to be issued regarding the removal of the state flag.

“I think that state flag may have been removed or will be removed as the state is now a Union Territory,” he said.

Advocate Arun Kandroo says under Article 370 of the Constitution of India, Jammu and Kashmir had a separate Constitution and a separate flag. On June 7, 1952, a resolution was passed by the Constituent assembly of Jammu and Kashmir, declaring an official state flag.
Syama Prasad Mukherjee, who founded the Bhartiya Jana Sangh that later became the BJP, started a campaign to oppose Article 370 since the Jan Sangh days, a BJP leader said.

After Jammu and Kashmir’s merger into the Indian, Union was passed, a slogan was coined by the BJP, “Ek desh mein do Vidhan, do Pradhan aur do Nishan nahi chalenge (There cannot be two Constitutions, two prime ministers and two flags in one nation)”, the BJP leader said.

In order to protest and create national awareness for Jammu and Kashmir’s complete integration, Mukherjee, along with Atal Bihari Vajpayee, travelled across the country and entered Jammu and Kashmir on May 11, 1953, without any permit.

“Mukherjee was arrested there by Jammu and Kashmir Police and later died in custody on June 23, 1953. Mukherjee’s move ended the permit system for entry into the state,” the leader said.

While the permit system was abolished followed by conversions of the prime minister and Sadr-e-Riyasat into the post of the chief minister and governor, but the Constitution and the flag continued to remain in the state, political analyst Rajiv Pandita says.

During the PDP-BJP rule in 2015, the state government, on March 12, 2015, had issued a circular asking constitutional authorities to hoist the state flag along with the tricolour on government buildings and vehicles. The move, however, had not gone down well with the coalition partner, the BJP.

However, on December 27, 2015, a single bench of the Jammu and Kashmir High Court headed by then judge Justice Hasnain Masoodi, directed the state government to hoist the state flag, along with the national flag, on all official buildings and vehicles of constitutional authorities.

Justice Masoodi, who is now the National Conference MP, said, “It is obligatory on every citizen as well as on every constitutional authority to maintain the sanctity of, and respect, the state flag in terms of the constitutional provisions and the Jammu and Kashmir Prevention of Insult to State Honours Act, 1979.”

But on January 1, 2016, divisional bench of the Jammu and Kashmir High Court, comprising Justice B L Bhat and Justice Tashi Rabstan, stayed the order of Justice Massodi on hoisting of the state flag.

Justice Massodi’s judgment was challenged by former inspector-general of police and currently advisor to Jammu and Kashmir governor Farooq Khan through a Letter Patents Appeal (LPA).