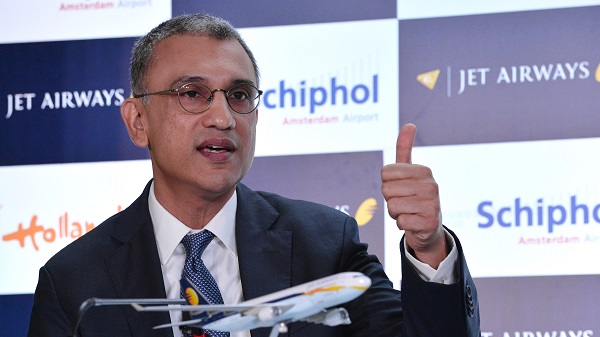 In a filing to stock exchanges, the airline said Dube “resigned from the services of the company with immediate effect due to personal reasons” (Photo: MANJUNATH KIRAN/AFP/Getty Images).

It comes a day after deputy CEO Amit Agarwal left his post on Monday (13).

In a filing to stock exchanges, the airline said Dube “resigned from the services of the company with immediate effect due to personal reasons”.

The latest high-level departures come after Etihad Airways last week made a conditional bid to invest in the airline.

Etihad added that it would not be able to invest more than Rs 17 billion, a fraction of what Jet Airways requires to resume its operations.

Lenders, led by the State Bank of India (SBI), now have to search for a new majority investor for the airline.

Jet Airways struggled to compete with low-cost carriers like IndiGo and SpiceJet that now dominate Indian skies and the debt-laden carrier was forced to ground its entire fleet last month, resulting in the loss of more than 20,000 jobs.

Jet has debts of more than $1 billion and been in a tailspin for months. It defaulted on loans and failed to pay many staff since the start of the year.

After its lenders declined to extend more funds, the carrier was forced to ground its entire fleet on April 17, triggering protests by thousands of employees who have been not paid salaries.