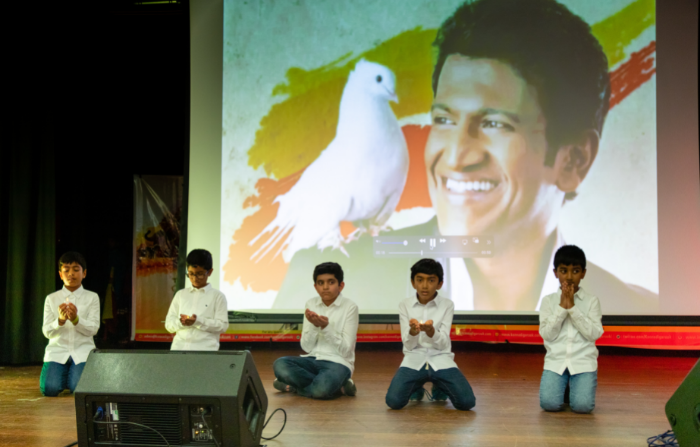 Little boys perform at Kannada Rajyotsava celebrations in London, the UK, on Saturday, November 13, 2021, with an image of late Kannadiga actor Puneeth Rajkumar in the background. (Photo credit: KannadigaruUK)

KANNADIGAS living in the UK came together in London to celebrate the 66th Kannada Rajyotsava, the foundation day of the southern Indian state of Karnataka.

Hosted on Saturday (13) by the KannadigaruUK, an organisation of Kannada-speaking Indian diaspora in the UK, the event featured food from Karnataka and performances by local talents who entertained the audience with dance and songs.

Participants also paid tribute to Puneeth Rajkumar, the famous Kannada actor whose untimely death in state capital Bengaluru last month had left Karnataka in shock and disbelief. Several songs that marked the musical evening of the programme were dedicated to the late actor who was popularly called ‘Power Star’.

Jeremy Pilmore-Bedford, the British deputy high commissioner in Bengaluru, who was the chief guest, noted the contribution of Kannadigas to the UK’s economy.

Pilmore-Bedford, who greeted the gathering in Kannada to applause, said he was privileged to have lived and worked in the South Indian state.

“I am absolutely delighted to be here in person on the foundation day of Karnataka. I can see the energy, vibrancy of the Kannadigaru,” he said and recalled having attended a virtual event last year.

The KannadigaruUK, which came into being after a few families in Reading decided to celebrate Rajyotsava in 2004, said it conducted online events during the lockdown period to help the diaspora stay connected.

Since its inception, the organisation has been holding Rajyotsava and Ugadi, a harvest festival widely celebrated in southern India, including Karnataka. It also organises yoga activities.

It said it mobilised funds for Covid victims in Karnataka.