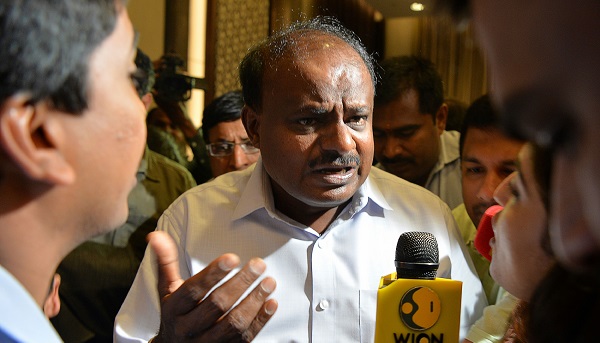 According to the schedule of the chief minister shared with the media earlier, Kumaraswamy was to leave for Delhi by a special flight at 11 am IST and take part in meetings there, before heading back to the city in the evening (Photo: MANJUNATH KIRAN/AFP/Getty Images).

KARNATAKA state chief minister, Janata Dal (Secular) leader H D Kumaraswamy has cancelled his scheduled visit to Delhi Tuesday (21), where he was expected to take part in a meeting of opposition leaders over the issue of Electronic Voting Machines (EVM), official sources said.

“The proposed visit of the chief minister to New Delhi today stands cancelled,” the CMO said, without specifying any reasons.

According to the schedule of the chief minister shared with the media earlier, Kumaraswamy was to leave for Delhi by a special flight at 11 am IST and take part in meetings there, before heading back to the city in the evening.

According to JD(S) sources, the chief minister was to take part in the meeting of opposition leaders over the EVM issue.

Ahead of the Lok Sabha poll results on May 23, leaders of various opposition parties would meet the Election Commission (EC) and raise the issue of tallying paper trail of votes (VVPATs) with EVM figures.

Opposition parties are demanding to a tally of VVPAT slips with EVM figures in an entire Assembly constituency in case a discrepancy is found in any polling booth.

The court has asked the EC to tally the VVPAT slips with EVM figures of five polling stations in each Assembly constituency across the country, which may delay the results.

Kumaraswamy had on Monday (20) voiced concern over the vulnerability of Electronic Voting Machines (EVMs).

Hitting out at exit polls, the chief minister in a series of tweets had alleged that this “artificially engineered” or “manufactured” Modi wave is being used by the BJP to lure regional parties well in advance to fill any shortfall after the results on May 23.

Most exit polls on Sunday (19) had forecast another term for Modi, with some of them projecting that the BJP-led NDA would get more than 300 seats to comfortably cross the majority mark of 272 in the Lok Sabha.

The BJP would win big in Karnataka, the pollsters have predicted with the saffron party increasing its tally compared last time.

Majority of the exit polls have predicted the BJP winning over 21 out of total 28 seats, compared to 17 last time.

Speculation is rife in political circles that any adverse results for Congress-JD(S) alliance in this polls, would have its implications on the longevity of the Kumaraswamy-led government in Karnataka.