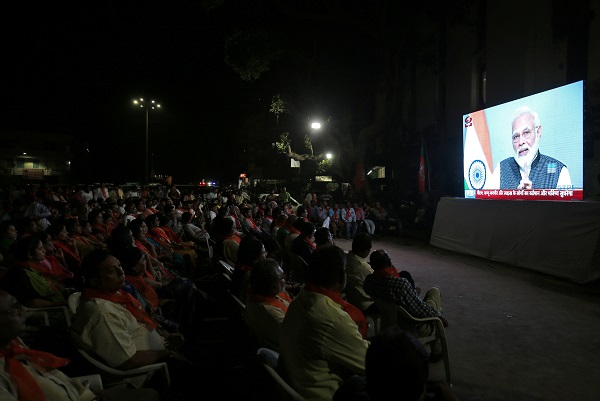 People watch as prime minister Narendra Modi delivers an address to the nation, on a TV screen in Ahmedabad, India, August 8, 2019 (REUTERS/Amit Dave).

KASHMIR region was stripped of its autonomy to free it from “terrorism and separatism” which was encouraged by Pakistan, Indian prime minister Narendra Modi said Thursday (8).

In his first comments on the constitutional bombshell carried out while Kashmir was under military lockdown, Modi insisted that his government had made a “historic decision”.

The Indian government rushed through a presidential decree Monday (5) to ditch the region’s constitutionally-guaranteed status.

Kashmir is also claimed by Pakistan which on Wednesday (7) expelled India’s ambassador and suspended all trade in protest at the move.

“Friends, I have full belief that we will be able to free Jammu and Kashmir from terrorism and separatism under this system,” Modi said.

“I have full faith that the people of Jammu and Kashmir, after defeating separatism, will move forward with new hopes and aspirations.”

The Indian leader said Pakistan used the special status “as a weapon against the country to inflame the passions of some people” against the Indian state.

Tens of thousands of people have died in a three-decade-old insurgency in Kashmir.

Internet and telephone connections in Kashmir have been cut since Monday (5) and a curfew imposed as the authorities feared trouble when the decision was announced.

Modi said the special status has “not given anything other than terrorism, separatism, nepotism and big corruption.”

Modi said he respected opposition politicians and prominent Kashmiris who have opposed the government’s strongarm tactics.

“We are working to answer their points but I request them to act to keep India’s interests and help Jammu and Kashmir and Ladakh,” he said.

“I want to assure my Jammu and Kashmir colleagues that slowly things will become normal and their problems will reduce.”

The contentious move comes just days before the Muslim festival of Eid al-Adha, and Modi said Kashmiris would not face difficulties celebrating the holiday.