Know about ‘devadasis’, women who live as sex slaves to Indian goddess 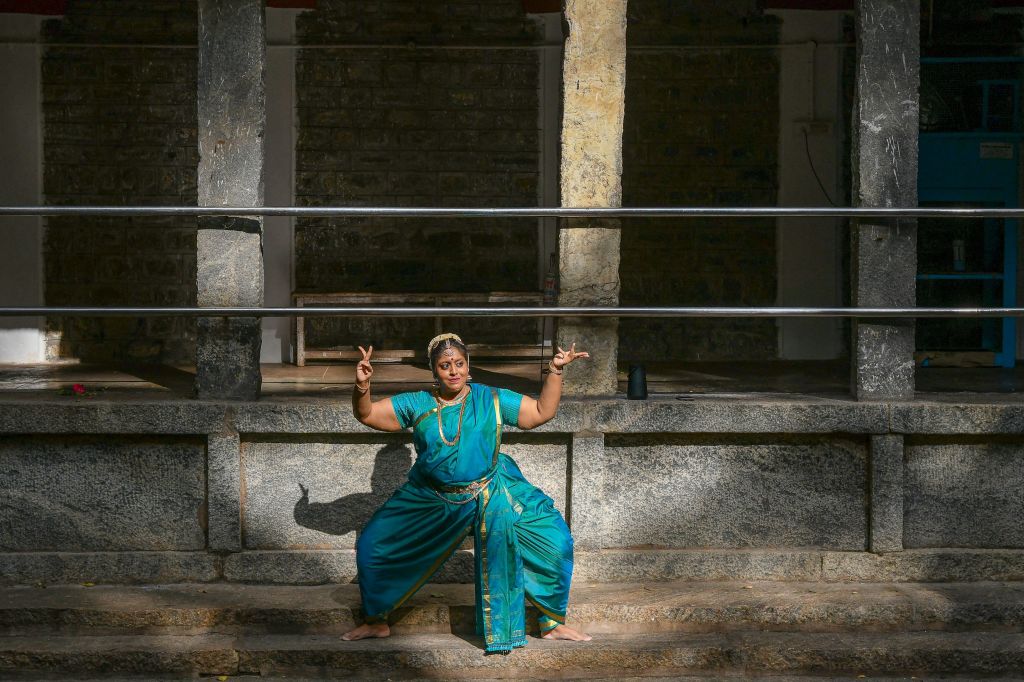 In this picture taken on September 25, 2022, Bharatanatyam dancer and art historian Gayathri Iyer performs a dance rendering the interaction of a Devadasi with Hindu deity Shiva, at a temple in Bengaluru, Karnataka. ‘Devadasis’ are expected to live a life of religious devotion, forbidden from marrying other mortals, and forced at puberty to sacrifice their virginity to an older man, in return for money or gifts. (Photo by MANJUNATH KIRAN/AFP via Getty Images)

Dedicated to an Indian goddess as a child, Huvakka Bhimappa’s years of sexual servitude began when her uncle took her virginity, raping her in exchange for a saree and some jewellery.

Bhimappa was not yet 10 years old when she became a “devadasi” — girls coerced by their parents into an elaborate wedding ritual with a Hindu deity, many of whom are then forced into illegal prostitution.

Devadasis are expected to live a life of religious devotion, forbidden from marrying other mortals, and forced at puberty to sacrifice their virginity to an older man, in return for money or gifts.

What followed was years of sexual slavery, earning money for her family through encounters with other men in the name of serving the goddess.

Bhimappa eventually escaped her servitude but with no education, she earns around a dollar a day toiling in fields.

Her time as a devotee to the Hindu goddess Yellamma has also rendered her an outcast in the eyes of her community.

She had loved a man once, but it would have been unthinkable for her to ask him to marry.

“If I was not a devadasi, I would have had a family and children and some money. I would have lived well,” she said.

Devadasis have been an integral part of southern Indian culture for centuries and once enjoyed a respectable place in society.

Many were highly educated, trained in classical dance and music, lived comfortable lives and chose their own sexual partners.

“This notion of more or less religiously sanctioned sexual slavery was not part of the original system of patronage,” historian Gayathri Iyer told AFP.

Iyer said that in the 19th century, during the British colonial era, the divine pact between devadasi and goddess evolved into an institution of sexual exploitation.

It now serves as a means for poverty-stricken families from the bottom of India’s rigid caste hierarchy to relieve themselves of responsibility for their daughters.

The practice was outlawed in Bhimappa’s home state of Karnataka back in 1982, and India’s top court has described the devotion of young girls to temples as an “evil”.

Campaigners, however, say that young girls are still secretly inducted into devadasi orders.

Girls are commonly seen as burdensome and costly in India due to the tradition of wedding dowries.

By forcing daughters to become devadasis, poorer families gain a source of income and avoid the costs of marrying them off.

Many households around the small southern town of Saundatti — home to a revered Yellamma temple — believe that having a family member in the order can lift their fortunes or cure the illness of a loved one.

It was at this temple that Sitavva D. Jodatti was enjoined to marry the goddess when she was eight years old.

Her sisters had all married other men, and her parents decided to dedicate her to Yellamma in order to provide for them.

“When other people get married, there is a bride and a groom. When I realised I was alone, I started crying,” Jodatti, 49, told AFP.

Her father eventually fell ill, and she was pulled out of school to engage in sex work and help pay for his treatment.

Rekha Bhandari, a fellow former devadasi, said they had been subjected to a practice of “blind tradition” that had ruined their lives.

She was forced into the order after the death of her mother and was 13 when a 30-year-old man took her virginity. She fell pregnant soon after.

“A normal delivery was difficult. The doctor yelled at my family, saying that I was too young to give birth,” the 45-year-old told AFP.

“I had no understanding.”

Years of unsafe sex exposed many devadasis to sexually transmitted infections, including HIV.

“I know of women who are infected and now it has passed on to their children,” an activist who works with devadasis, who asked not to be named, told AFP.

“They hide it and live with it in secrecy. Many women have died.”

Parents are occasionally prosecuted for allowing their daughters to be inducted as devadasis, and women who leave the order are given meagre government pensions of 1,500 rupees (£15) per month.

Nitesh Patil, a civil servant who administers Saundatti, told AFP that there had been no “recent instances” of women being dedicated to temples.

India’s rights commission last year ordered Karnataka and several other Indian states to outline what they were doing to prevent the practice, after a media investigation found that devadasi inductions were still widespread.

The stigma around their pasts means women who leave their devadasi order often endure lives as outcasts or objects of ridicule, and few ever marry.

Many find themselves destitute or struggling to survive on poorly paid manual labour and farming work.

Jodatti now heads a civil society group which helped extricate the women AFP spoke to from their lives of servitude and provides support to former devadasis.

She said many of her contemporaries had several years ago become engrossed by the #MeToo movement and the personal revelations of celebrity women around the world that revealed them as survivors of sexual abuse.

“We watch the news and sometimes when we see famous people… we understand their situation is much like ours. They have suffered the same. But they continue to live freely,” she said.

“We have gone through the same experience, but we don’t get the respect they get.

“Devadasi women are still looked down upon.”