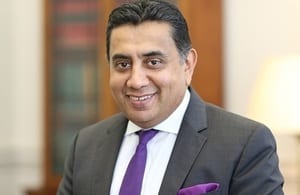 Lord Ahmad will also visit Jamia Millia Islamia University to speak to students about climate change, inter-faith, diversity, and equality in India and the UK.

LORD Tariq Ahmad of Wimbledon is on a visit to India to further strengthen relation between the two countries.

During his visit to New Delhi, Lord Ahmad will promote the UK’s role to work with India on major global challenges such as climate change and gender equality.

He is also scheduled to celebrate the 150th birth anniversary of Mahatma Gandhi.

Lord Ahmad’s mother was born in Jodhpur of Rajasthan state and his father in Gurdaspur of Punjab state.

Lord Ahmad is expected to meet several Indian ministers, including Abbas Naqvi, Minister of Minority Affairs; Smriti Irani, Minister of Textiles and of Women and Child Development; and Prakash Javadekar, Minister of Environment, Forest and Climate Change, and of Information and Broadcasting, among others.

Arriving in New Delhi, Lord Ahmad said: “I am delighted to be here in India, a place that holds a special place in my heart. The UK aspires to be a Force for Good around the world, and I look forward to strengthening our collaboration with India on global challenges that are threatening our world, in particular, climate change and gender equality.

“As we leave the European Union, our partnership with India across an array of sectors from trade and education to climate change and the rule of law will be more important than ever. I am keen while I am here to also build on the Living Bridge of people-to-people links that bind our two countries so closely.”

Lord Ahmad will also visit Jamia Millia Islamia University to speak to students about climate change, inter-faith, diversity, and equality in India and the UK.

Lord Ahmad of Wimbledon is a conservative life peer in the UK’s House of Lords.

He is also the minister of state for the Commonwealth, UN and South Asia at the Foreign and Commonwealth Office, and prime minister’s special representative on preventing sexual violence in conflict.