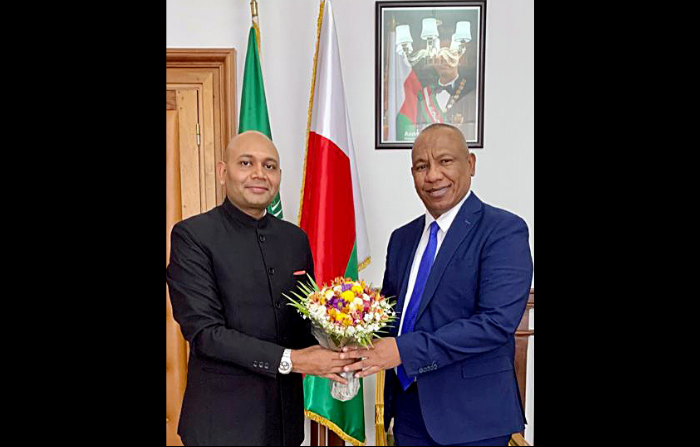 INDIAN ambassador to Madagascar Abhay Kumar on Tuesday (11) participated in a review meeting over the progress in bilateral ties between New Delhi and Antananarivo, according to the Indian embassy in the capital of the island-nation of Madagascar and the Comoro Islands.

The meeting was chaired by Madagascar prime minister Christian Ntsay and it was attended by a number of cabinet ministers, including foreign affairs minister Patrick Rajoelina.

“Today Hon’ble Prime Minister of Madagascar H.E. @NtsayC chaired a meeting to review the progress in bilateral relations between #India and #Madagascar which was attended by several cabinet ministers including the Minister of Foreign Affairs @prajoelina and @AmbassadorAbhay,” the Indian embassy said in a tweet.

Today Hon'ble Prime Minister of Madagascar H.E. @NtsayC chaired a meeting to review the progress in bilateral relations between #India and #Madagascar which was attended by several cabinet ministers including the Minister of Foreign Affairs @prajoelina and @AmbassadorAbhay 🇮🇳🤝🇲🇬 pic.twitter.com/WbfEILYnP8

Bilateral ties between India and Madagascar are on the upswing over the last three years.

The African island-nation, along with the Comoros, became part of the Indian Ocean Region Division in December 2019.

In March 2020, India became an observer at the Indian Ocean Commission, a grouping of western Indian Ocean islands.

In October that year, Ntsay hosted a meeting to review his country’s bilateral relations with India and it was also attended by the Indian ambassador and a number of local cabinet ministers.

Tuesday’s meeting was the second such meeting chaired by the Madagascar prime minister to review the two countries’ bilateral ties.

India has been sending regular humanitarian aid to Madagascar under its SAGAR policy.

The country’s external affairs minister, Subrahmanyam Jaishankar, had a telephonic talk with his Madagascar counterpart in March last year and India deployed INS Jalashwa with 1,000 tonnes of rice for the people of drought-hit southern Madagascar.

Besides, a special training team of the Indian Navy trained Madagascar’s armed forces around the same time.

About 20,000 people of Indian origin, mostly from Gujarat, live and work in Madagascar. India is also a key partner of Madagascar with the two countries’ bilateral trade touching $400 million (£294 million) in 2020-21.