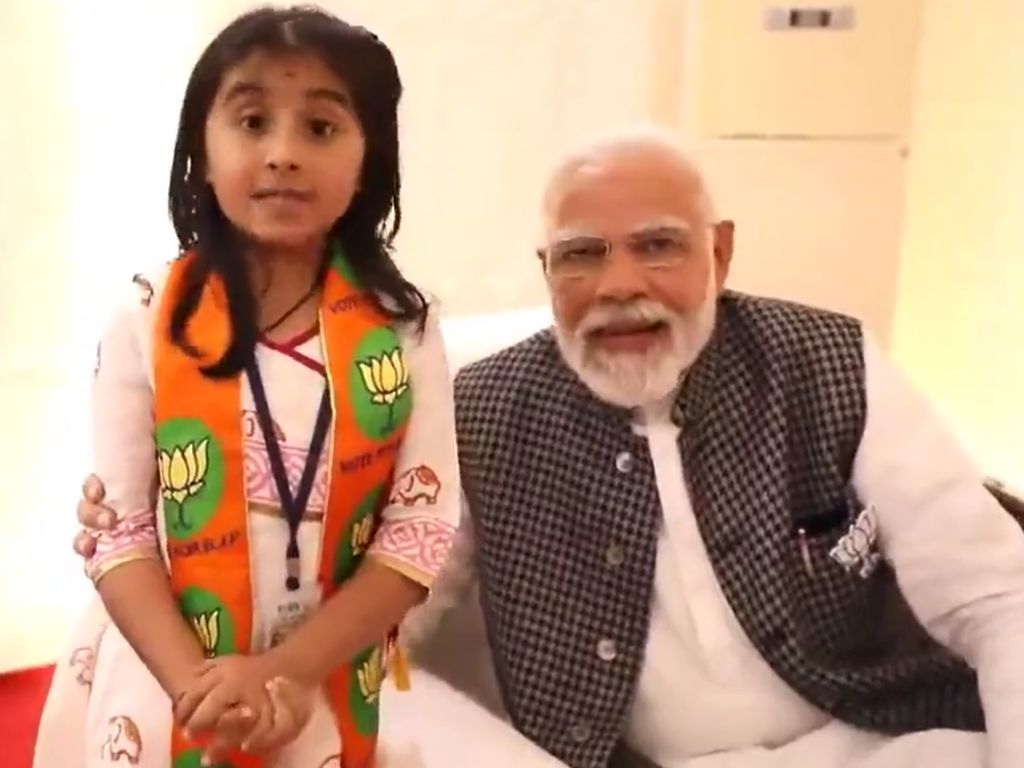 A girl wearing a sash of India’s ruling BJP praises the party in a video in which prime minister Narendra Modi is also seen. (Picture: Twitter)

A major controversy erupted on Monday (21) after a seven-year-old girl appeared in a video with Indian prime minister Narendra Modi where she praised his ruling Bharatiya Janata Party (BJP) ahead of the upcoming two-phase elections in the western state of Gujarat.

The opposition Indian National Congress tore into the ruling party and accused the PM of using a child for campaigning. It also asked the Election Commission of India and National Commission for Protection of Child Rights (NCPCR) to take cognisance of the matter.

The video, which showed the girl narrating a poem in Gujarati in which she applauded the ruling party, was shared by the saffron party on Twitter. The minor also wore a BJP sash around her shoulder.

Modi, who was seated next to the girl, was seen smiling throughout the video that ran for less than a minute.

“BJP, BJP, BJP, wherever you see, you will find BJP. Every discussion starts and ends with BJP. People are playing various games to defeat BJP,” the girl said in the video.

She also said that nobody can defeat the ruling party in Gujarat that follows the “principle of development”.

“Who made curfew the thing of the past? Who removed Article 370? Who took Narmada to Nar (man)? Who fulfilled the wait of Ram Mandir in Ayodhya?” she said in her eulogy.

At the end, Modi was seen applauding the girl with a “shabaash” (kudos).

Indian commerce and industry minister Piyush Goyal tweeted the video, saying in Hindi, “Listen to the important message that this little girl from Gujarat gives”.

Senior Congress parliamentarian Jairam Ramesh said on Twitter, “A small child is being used by the prime minister for election campaign. This is a clear violation of the law. Where is the Election Commission? Where is the National Commission for Protection of Child Rights (NCPCR)?”

The party’s spokesperson and social media in-charge Supriya Shrinate shared the video to claim that it was a clear violation of the law.

The elections in Gujarat on December 1 and 5 are evolving as a prestige battle between the BJP, Congress and the Aam Aadmi Party which has fast emerged as a force in the state. The saffron party has been ruling the state for more than two decades now with Modi himself serving as its chief minister for 13 years before becoming the prime minister.

Top leaders, including Modi, has been making frequent visits to the state for campaigning for the upcoming electoral battle.

The results of the polls will be announced on December 8 along with those in Himachal Pradesh.