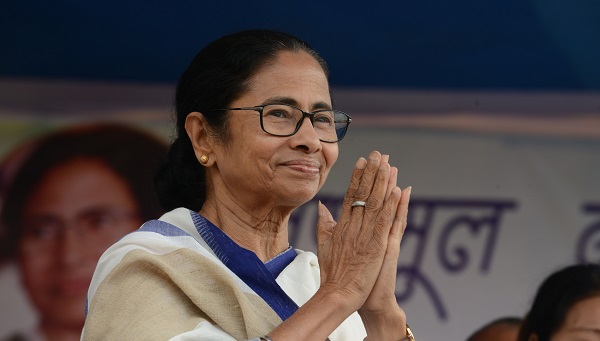 She said that it were BJP “hooligans” who had destroyed a heritage of the state by breaking the bust in the the violence during BJP Amit Shah’s roadshow (Photo: DIPTENDU DUTTA/AFP/Getty Images).

WEST BENGAL chief minister Mamata Banerjee Thursday (16) rejected prime minister Narendra Modi’s offer to install a new bust of social reformer Pandit Ishwar Chandra Vidyasagar at the same spot where it was vandalised saying that Bengal has the money for it.

She said that it was BJP “hooligans” who had destroyed a heritage of the state by breaking the bust in the violence during BJP Amit Shah’s roadshow.

It is a matter of shame for Bengalis that the bust of Vidyasagar was vandalised, she said at a poll rally at Mandirbazar in support of Trinamool Lok Sabha candidate C M Jatua.

“Bengal does not seek alms from BJP. We have the money for a new bust of Vidyasagar, who was part of Bengal Renaissance. Don’t you (BJP) feel ashamed saying that Bengal has been reduced to a state of being a pauper? ”

Banerjee was referring to a comment by Shah at a poll rally at Canning earlier this week in which he had said that under Banerjee government “sonar(golden) Bangla has become kangal(pauper) Bangla”.

The prime minister said at a poll rally at Mau in Uttar Pradesh that his government is committed towards Ishwar Chandra Vidyasagar’s vision and promised to install his grand statue made of “panch dhatu” (five metals) at the same spot where it was vandalised by “TMC goondas”.

Hitting back, the TMC supremo called Modi is a liar, the “like of which was never seen in the country”.

“He (Modi) should squat holding his ears for destroying a heritage of the state,” she said.
“The media has shown how Vidyasagar’s bust was broken. Bengalis’ pride is hurt that they will not spare BJP. They will not give it (BJP) a single vote …. It will be very surprising if Modi gets a single vote from Bengalis,” Banerjee claimed.

Nine Lok Sabha seats in south Bengal will go to the polls in the last phase.

Banerjee accused the prime minister of holding a public meeting in a nearby area on land owned by a person who runs an unlicensed micro-finance institution.

“I am going to file a case against the person who owns the land. Is BJP getting a share of the pie from him? I have come to know that the person is raising crores,” she said.

She alleged that the BJP is spreading fake messages on the social media and warned the voters not to fall prey to it.

Later speaking at another rally at Diamond Harbour, from where her nephew Abhishek Banerjee is seeking re- election, Banerjee said BJP has developed a sense of fear of losing the elections.

“As the last phase of elections is approaching you (Modi) have become mad and are talking nonsense.

“Modi had promised to usher in achhe din but see how the prices of diesel, gas and petrol are being increased. The government is going to close down companies like Burn Standard, BSNL and AirIndia if it comes to power…. The BJP government is now killing adivasis and minorities.

“Narendra Modi you are a fascist, a torturer and you should go,” she said.

Regretting the Election Commission (EC)’s decision to declare today the last day of campaigning before Sunday’s last phase of elections, Banerjee said “I thought the EC is impartial but it seems it is sold to BJP. I am ready if I have to go to jail for saying this”.

Banerjee said in the last six phases of the general elections Modi’s votes have touched the bottom. “Modi has already lost the elections”.

She urged the Trinamool Congress workers to be careful so that miscreants were not able to tamper with the EVMs which are kept now in the strongrooms.