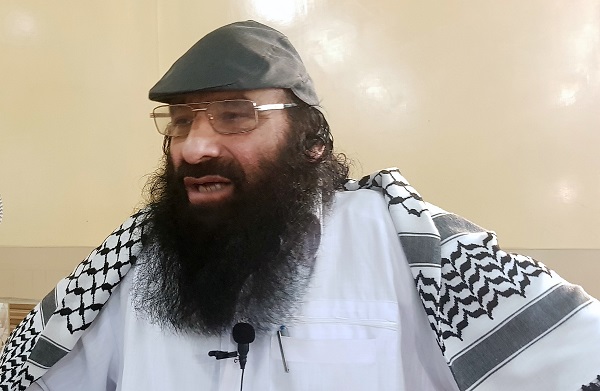 “It’s binding upon the armed forces of Pakistan, the first Islamic nuclear power, to enter India-occupied Kashmir to militarily help the people of the territory,” Syed Salahuddin, who heads an alliance of over a dozen groups fighting in Kashmir, said (REUTERS/Abu Arqam Naqash).

A KASHMIRI militant commander said on Sunday (1) that Pakistan should send troops to protect the people of Kashmir if the United Nations does not send peacekeepers, after New Delhi revoked its autonomy last month.

“It’s binding upon the armed forces of Pakistan, the first Islamic nuclear power, to enter India-occupied Kashmir to militarily help the people of the territory,” Syed Salahuddin, who heads an alliance of over a dozen groups fighting in Kashmir, said.

Khan has so far focused on a global diplomatic campaign condemning India’s actions.

“In these testing times… mere diplomatic and political support is not going to work,” Salahuddin told a gathering of hundreds in Muzaffarabad, the capital of the Pakistani zone of Kashmir.

On stripping Kashmir of its special status, New Delhi blocked the region’s right to frame its own laws and allowed non-residents to buy property there. The government said the reform would facilitate Kashmir’s development, to the benefit of all.

But the move angered many residents of the region, which has been under a security clampdown ever since with telephone lines, internet and television networks blocked and restrictions on movement and assembly.

Islamabad this year announced it was cracking down on militant groups amidst global pressure to do so after a group launched a deadly attack on paramilitary police in Kashmir in February.

Salahuddin said that “harsh steps” taken by the government of Pakistan had hindered his group’s ability to take action.

“These steps have restrained us from launching armed resistance against India in a move that is unfair,” he said.

Officials in Pakistan say the government is working to show it is behaving responsibly and have rejected suggestions there could be a temptation to use militants as proxies against India.

Salahuddin, who is originally from Badgam town in Kashmir, was placed on a list of global terrorists by Washington in 2017, a move Pakistan’s government at the time called unjustified.