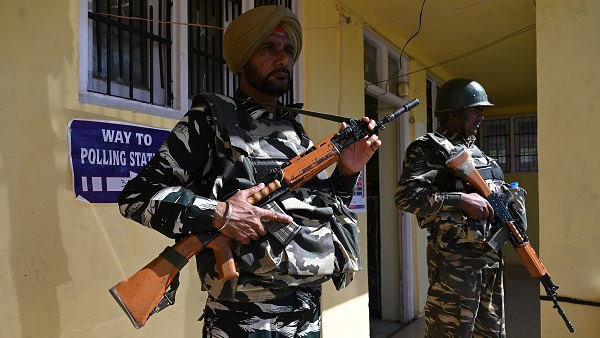 Indian paramilitary troopers stand guard at a polling station during the fifth phase of India’s general elections in Kashmir’s Shopian district, south of Srinagar on May 6, 2019 (Photo: TAUSEEF MUSTAFA/AFP/Getty Images).

MILITANTS today (6) lobbed a grenade towards a polling station in Pulwama district of Jammu and Kashmir where polling is underway for the Anantnag Lok Sabha constituency, police said.

A grenade was lobbed towards Rohmoo polling station in Pulwama but there were no reports of any casualties in the blast, a police official said.

He said security forces have cordoned off the area.

This was the first militant attack on a polling station in this Lok Sabha election in Jammu and Kashmir.

Polling is being held in Pulwama and Shopian districts of Anantnag Lok Sabha constituency which also includes Anantnag and Kulgam districts as well.

The Lok Sabha polls to this constituency are being held in three phases due to security reasons.

Anantnag district went to polls on 23 April, while voting in Kulgam district took place on 29 April.

There are 18 candidates in the fray for Anantnag constituency including PDP president and former chief minister of Jammu and Kashmir, Mehbooba Mufti.