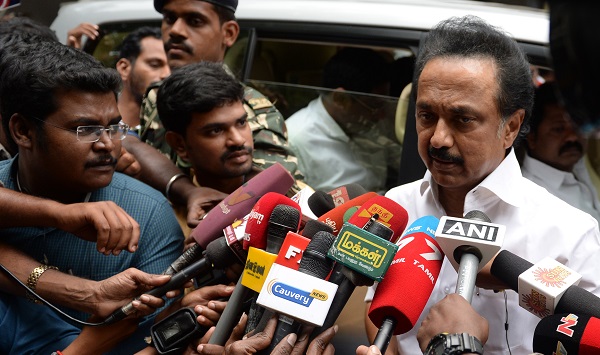 The DMK’s move is perceived as a signal to the Telangana veteran that it was keen to carry on its alliance with the Congress even after the results of the seven-phase polling are out on May 23 (Photo: ARUN SANKAR/AFP/Getty Images).

THE DMK has indicated its party chief MK Stalin may not meet K Chandrasekar Rao on May 13, as announced by the Telangana chief minister’s office earlier.

Sources close to the DMK president only said Stalin was ‘busy’ with his campaign schedule for the May 19 by-polls to four constituencies in the state and declined to divulge more details.

Earlier, a statement from the Telangana chief minister’s office (CMO) had said that Rao would meet the DMK chief at his residence here on May 13.

He had met his Kerala counterpart Pinarayi Vijayan on Monday, even as Karnataka chief minister H D Kumaraswamy also rang up Rao after learning about his visits to Kerala and Tamil Nadu.

Rao, who had floated the idea of a non-Congress, non-BJP front some time ago, had met Stalin in April last as part of his outreach to regional parties, with the DMK leader hosting lunch for the visiting TRS supremo and his party colleagues.

However, the Dravidian party later entered into a poll pact with Congress and faced the April 18 Lok Sabha polls in the state in alliance with the national party as part of a mega-coalition that also includes the Left.

The DMK’s move is perceived as a signal to the Telangana veteran that it was keen to carry on its alliance with the Congress even after the results of the seven-phase polling are out on May 23.

Incidentally, it was Stalin who had declared Congress President Rahul Gandhi as the Opposition’s Prime Ministerial candidate at a party meeting here, though the idea did not find favour with West Bengal Chief Minister Mamata Banerjee and Samajwadi Party chief Akhilesh Yadav.

While by-polls to 18 assembly seats were held on April 18 along with the Lok Sabha elections, four others are going to polls on May 19.

The outcome of the by-polls is crucial for Tamil Nadu as it would determine the continuance of the ruling AIADMK in power.

Therefore, all parties including arch-rivals AIADMK and DMK are leaving no stone unturned to ensure that they won maximum seats even as Stalin has been claiming that the ruling party will lose the elections and pave the way for a new government headed by the DMK.