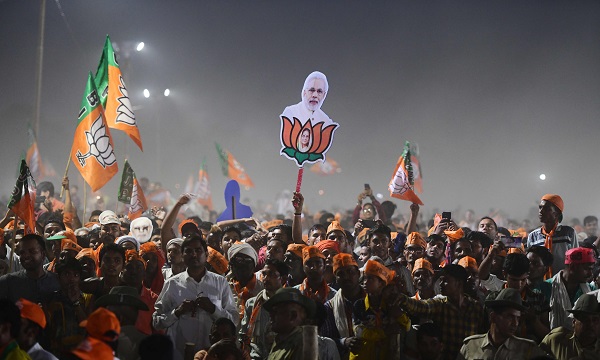 Bharatiya Janata Party (BJP) supporters attend a rally as Indian prime minister Narendra Modi delivers a speech during a rally ahead of Phase VI of India’s general election in Allahabad on May 9, 2019(Photo: SANJAY KANOJIA/AFP/Getty Images).

IT’S 11 am IST and about a dozen people sitting at a tea shop in Ferozepur Namak village here are discussing politics over hot cuppas.

“First it was demonetisation and now cow vigilantes are after our community,” said a visibly angry Ali Mohammad.

“Don’t ask anyone here anything about the Modi government. People are very angry,” the 70-year-old warned.

“He calls himself a ‘chowkidaar’ (watchman), so should he not do his job properly. Here 70 per cent people own cows and buffaloes, their lives are being ruined,” Ali said, alluding to prime minister Narendra Modi’s self-designated status.

Others sitting at the shop said Muslims fear what would happen if Narendra Modi returns to power.

In the district which has repeatedly made headlines for mob lynchings and cow vigilantism over the last few years, enthusiasm for Lok Sabha polls appears low.

The route from Gurgaon to Nuh passes through nine villages, but only a few houses in one of these, Ghasera, have put up Congress flags.

Nowhere else posters or banners of political parties can be seen, even though the ruling Bharatiya Janata Party, the Congress and the Indian National Lok Dal (INLD) hold sway in some of these places.

Though no incidents of cow vigilantism were reported from Ghasera, Muslims here are also wary.  Admitting that he is scared of bringing a cow from outside the village, a local, Nambardar Deen Mohammad, said people are disappointed with the BJP-led state government over inaction in lynching cases and incidents of harassment of Muslims by cow vigilantes.

“There is resentment regarding this in the whole community, this will definitely have an impact on the poll outcome,” he said.

“People here want to teach the BJP a lesson in this general election,” he added.

In 2017, a dairy farmer from Nuh’s Jaisinghpur village, Pehlu Khan, was beaten to death allegedly by cow vigilantes in the neighbouring Alwar district.

In July last year, Rakbar Khan, a dairy farmer from Nuh’s Kolgaon village, died after he was allegedly thrashed brutally by a mob in Alwar on suspicion of cow smuggling.

According to the website of Nuh district, dairy farming is the main source of livelihood for locals.    A dairy can have up to 500 cows and milk from Nuh is supplied to Gurgaon and Delhi.

Locals claimed earlier they would go to Nagaur in Rajasthan to buy a cow of a good breed that would provide more milk. However, now they cannot step out of their villages with their cows.

“This area is being defamed as ‘mini Pakistan’. Meo people are not traitors, they are a hard working lot. Meo Muslims have a tradition of gifting cows in a daughter’s wedding and it continues till date. And today these people are being called cow killers, this is extremely unfortunate,” said Yunus Alvi, a local journalist from Malab village.

Asked if this will have an impact in the elections on May 12, he said, “Of course, 90 per cent of the voters here have been traditional Congress supporters.”

Dharambir, a painter working at the house of Malab sarpanch, said, “We have harmonious relations with each other, we are only upset with the politicians. We even eat out of the same plate at weddings but the politicians are trying to divide us.”

Ali is also impressed with Congress president Rahul Gandhi’s minimum income guarantee scheme, under which 20 per cent poorest families in the country will get Rs 72,000 annually if the party comes to power after the general election.

Asked how hopeful he was about the Congress fulfilling its promise, the septuagenarian said, “Did they not keep their word in Chhattisgarh and Madhya Pradesh?”

In the run-up to last year’s assembly elections in the two states, the Congress had promised to waive loans of farmers if it came to power.

“This is not an issue here and there is no unhappiness among voters. Only those doing wrong things are scared. Law is same for all,” he said.

“The Khattar government has worked a lot for village development, irrigation and health etc. The BJP candidate is in the electoral contest on the basis of this work,” he said.

Also in the fray are Mehmood Khan of the Jannayak Janata Party-Aam Aadmi Party combine and INLD’s Virendra Rana.