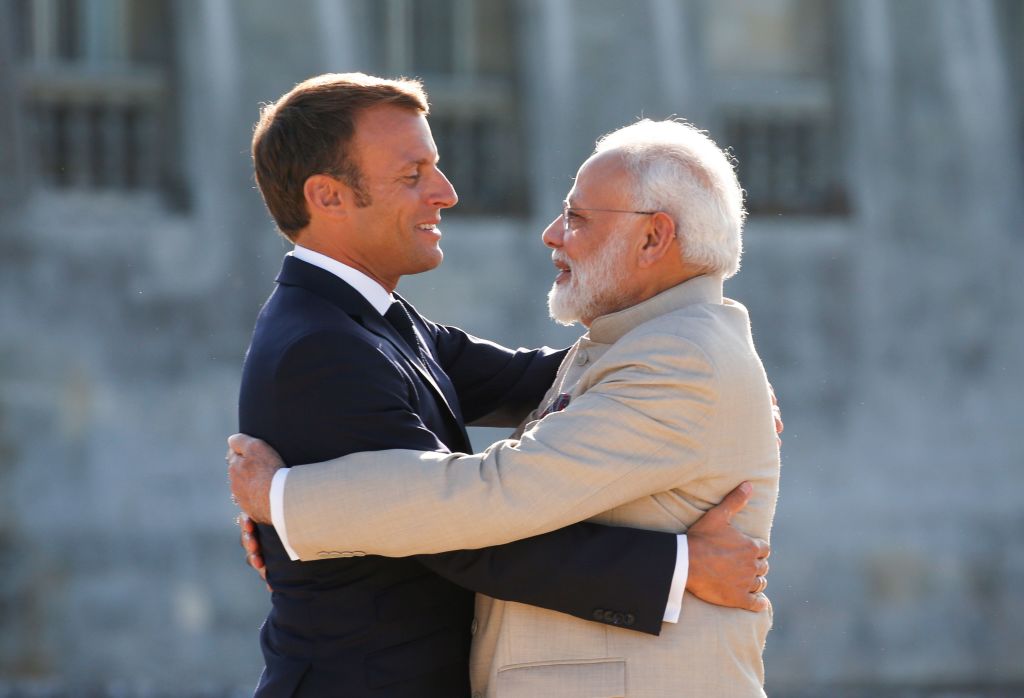 FILE PHOTO: French President Emmanuel Macron (L) hugs Indian Prime Minister Narendra Modi as he welcomes him before their meeting at the Chateau of Chantilly, near Paris, on August 22, 2019. (PASCAL ROSSIGNOL/AFP via Getty Images)

FRENCH President Emmanuel Macron and Indian Prime Minister Narendra Modi have vowed to “act jointly” in the Indo-Pacific region, as a row intensified with Australia and the US over a ditched submarine contract.

Macron’s telephone talks with Modi were timed conspicuously as French anger over an Australian cancellation of a submarine contract in favour of US submarines as part of an alliance with Washington and the UK appeared undiminished.

US officials have said US President Joe Biden is seeking a phone call with Macron to ease tensions, while Macron has taken the unprecedented step of recalling France’s ambassadors to Australia and the US.

The French presidency said Macron and Modi agreed they would “act jointly in an open and inclusive Indo-Pacific area”.

Macron assured Modi of France’s continued “commitment to the strengthening of India’s strategic autonomy, including its industry and technology base, as part of a close relationship based on trust and mutual respect”.

The statement from Macron’s office said their shared approach was aimed at promoting “regional stability and the rule of law, while ruling out any form of hegemony”.

Calling Macron “my friend” in a tweet, Modi said India placed “great value on our strategic partnership with France”.

Modi’s office added in a statement that both countries had an “important role” for stability and security in the Indo-Pacific region.

AUKUS, the new three-way strategic alliance between Washington, Canberra and London is seen aimed at countering the rising power of China.

Paris has in the last years sought to tighten ties with India: In 2016 the two sides signed a multi-billion dollar deal for 36 French Rafale fighter jets for New Delhi.

While the agreement is under investigation in France over kickback allegations, it is viewed as a commercial and diplomatic success for Paris.

Indian media have speculated that Australia’s cancellation of the submarine deal could spark a French-Indian submarines agreement.

France accused its allies of a “stab in the back” after learning the US had secretly led talks about the new strategic alliance and struck the deal for the delivery of American nuclear-powered submarines to Australia.

Australia informed France only hours before pulling out of the submarines deal, according to the French government.

In the upcoming call with Biden, Macron will demand “clarifications”, his political advisor Stephane Sejourne said, adding it would not be “a reconciliation talk”.

France, which has a presence in the region through overseas territories such as New Caledonia, has been trying to calm down tensions in the area, but “the US is in more of a confrontation with China”, Sejourne said.

European ministers rallied around France as the submarines dispute threatened to delay trade talks with Washington and Canberra.

German Europe Minister Michael Roth said France’s diplomatic crisis with the US was a “wake-up call for all of us” to unite an often divided EU on foreign and security policy.

Naval Group had already completed $1.1 billion worth of work on the submarines, it said, but suffered no losses as the work was covered by Australian payments already made.

But calling the pullout “a betrayal”, the ministry said the talks would now determine the size of “compensations and damages” owed by Australia.