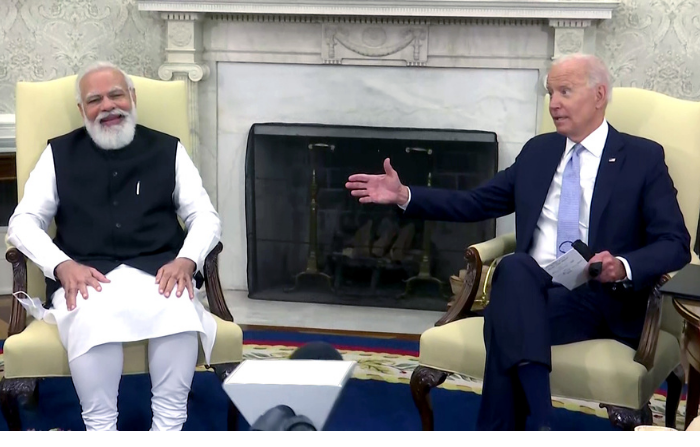 INDIAN prime minister Narendra Modi on Friday (24) met US president Joe Biden at the White House in Washington DC in their first-ever in-person meeting after the Democrat took office in January.

The meeting started on a light note with both leaders found cracking jokes and laughing.

According to sources, Biden cracked jokes saying there were five Bidens in India. Responding to that, Modi said he was carrying some genealogy papers along for the president to look at.

During his visit to India in 2013 (Biden was then the US vice president), he had told an audience in Mumbai, India’s financial capital, that his distant relatives lived there. Two years later, he said the same at an event in Washington, saying there are five Bidens who reside in Mumbai.

China mocks Quad ahead of summit: ‘US’ cannon fodder’

Biden also told Modi that the Indian press is better behaved than the American one.

“I think what they’re going to do is bring in the press. The Indian press is much better behaved than the American press. And I think, with your permission, we should not answer questions because they won’t ask any questions on point,” he told his Indian guest. Modi completely agreed before the duo started their talks.

Biden tweeted ahead of his meeting with Modi, saying,“This morning I’m hosting Indian Prime Minister Narendra Modi at the White House for a bilateral meeting. I look forward to strengthening the deep ties between our two nations, working to uphold a free and open Indo-Pacific, and tackling everything from COVID-19 to climate change.”

Modi also tweeted a video of his meeting with Biden.

The Indian prime minister has so far had a busy schedule in the US. He met the chief executive officers of five US companies on Thursday (23), the day he reached Washington DC, before meeting vice president Kamala Harris.