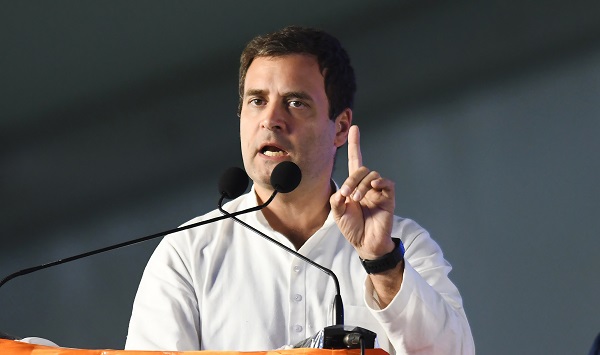 “We will not run the government for 15 people because they are not our ‘malik’ (masters),” he told a public meeting at Chomu in Jaipur district.

“Polling in most states is over and the result is clear. PM Narendra Modi is going to lose the elections and the Congress government of the farmers and the youth is about to come in,” he said.

“You are our masters and we will do what you will order,” he told the gathering.

Mentioning the Rafale aircraft deal, Gandhi said he had challenged Modi to a debate on corruption. But he is silent on.

The Congress leader also claimed that the prime minister had failed to answer his questions in Parliament.

He said the Nyay scheme, which promises income support to the poorest in the country if the Congress comes to power, will boost the country’s economy.

Gandhi said he will not claim it will create two crore employment opportunities, but added that “factories will restart, lakhs of youth will get jobs”.

Modi has handcuffed the youth, we want to set your hands free,” he said.

If young people want to start a business no permissions will be required from any government office for three years, he said.

Taking a swipe at the prime minister, Gandhi said when Modi gives a speech there is a teleprompter in front of him warning him not to speak about the youth or the farmers.

Referring to what he has claimed are existing vacancies, Gandhi said as soon the Congress comes to power the youth will get 2.2 million government jobs.

Amid the shouting of the ‘Chowkidar chor hai’ slogan, Gandhi said that the watchman’s “biggest theft” was the Rs 300 billion which he “stole” from the Indian Air Force and gave to industrialist Anil Ambani.

The reference was to the Congress claim that the Reliance Group has unfairly bagged a contract worth this amount from French company Dassault in related deals after the Modi government signed the Rafale contract.

The allegation has been denied by the government and the Ambani Group.

He claimed the “second theft” by Modi was writing off loans taken by “15 people”, but not those by the farmers and small and medium businessmen.

Rajasthan chief minister Ashok Gehlot and state Congress president Sachin Pilot were among the other party leaders who attended the rally.