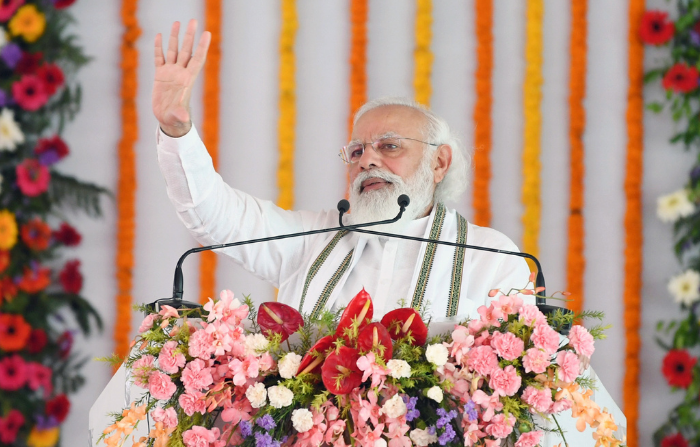 INDIAN prime minister Narendra Modi on Tuesday (14) laid the foundation stone of a university named after Raja Mahendra Pratap Singh in Aligarh in the northern state of Uttar Pradesh. Singh (1886-1979) was a Jat hero who was an active participant in India’s freedom movement besides an educationist and social reformer. He also served as the president of the first government of India-in-exile in Kabul, Afghanistan, in 1915.

The event was the first of the many scheduled visits of Modi to the state which will go to elections in the early part of 2022. UP is considered the most important political state in India and whichever party does well there is considered to be a frontrunner to form the government in New Delhi. India’s next general election is due in 2024 and Modi’s Bharatiya Janata Party (BJP), which has been sweeping the state since the 2014 Lok Sabha election, will look to return to power again next year.

“Prime Minister Narendra Modi will lay the foundation stone of Raja Mahendra Pratap Singh State University in Aligarh, Uttar Pradesh, on 14 September 2021 at around 12 noon, which will be followed by his address on the occasion. The Prime Minister will also visit the exhibition models of Aligarh node of Uttar Pradesh Defence Industrial Corridor and Raja Mahendra Pratap Singh State University,” the prime minister’s office (PMO) said in a statement ahead of Modi’s visit to the poll-bound state.

The university for which Modi laid the foundation stone is being set up on an area of 92 acres in Aligarh’s Kol tehsil and will give affiliation to 395 colleges of Aligarh division.

For the observers, the decision to set up the university honouring Singh is a bid to woo the influential Jat community ahead of the polls next year. The Jat community constitutes 17 per cent of the population in western UP and has supported the ruling party overwhelmingly in the 2014 and 2019 general elections and 2017 state elections. However, with the farmers’ agitation gaining momentum this time, the ruling BJP might feel apprehensive that the agriculture-based community may breach the tradition this time.

UP chief minister Yogi Adityanath, who will seek re-election next year, said ahead of a bypoll in Aligarh in 2019 that a university after Singh would be set up. He said that the Jat king had given land to Aligarh Muslim University (AMU) but the benefit was not passed to all and that students from the Scheduled Castes and Scheduled Tribes were denied reservation in admission at the AMU.

Modi’s action on Tuesday validated the chief minister’s announcement and could be an effective move to appease the Jat sentiment when farmers from the community are strongly protesting the central government’s new farm laws passed last year.