Modi mocked after he praises Assam CM Himanta Sarma for flood work: ‘No sir, CM in hotel with Sena MLAs’ 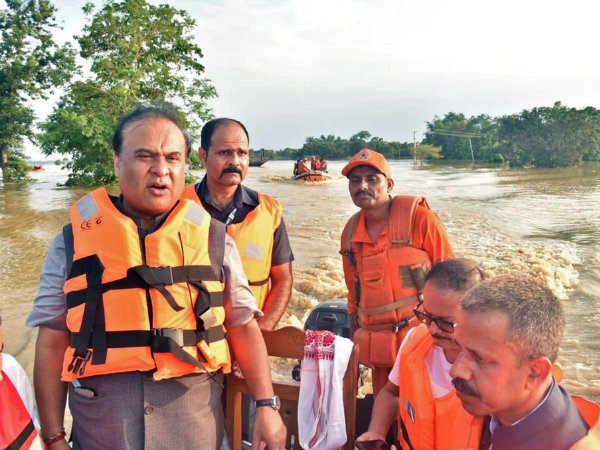 Himanta Biswa Sarma (second from left), the chief minister of the north-eastern Indian state of Assam, conducts a survey of the flood-affected areas from a boat with other officials on Wednesday, June 22, 2022. (ANI Photo)

WHILE it is the western Indian state of Maharashtra which is witnessing an intense political drama, it is also another state, located thousands of miles away to the north-east, which has also found itself in the thick of things and it is Assam.

The state, which is also ruled by India’s ruling Bharatiya Janata Party (BJP), has been in the headlines as a number of revolting lawmakers of the Shiv Sena, the leader of Maharashtra’s MVA coalition government, have taken shelter in a luxury hotel there. Himanta Biswa Sarma, the chief minister of Assam, was reportedly seen at the hotel before the Sena lawmakers’ arrival even though he has said that his state has nothing to do with the developments seen in Maharashtra.

“There are many good hotels in Assam, anyone can come there and stay…there is no issue with it. I don’t know if Maharashtra MLAs are staying in Assam. MLAs of other states can also come and stay in Assam,” Sarma told Asian News International. He even took a dig at his embattled Maharashtra counterpart Uddhav Thackeray saying he too was welcome to Assam for a vacation.

But it is not only the political drama of Maharashtra which has made Assam a part of the story. The north-western state has also been affected by deadly floods that have killed more than 100 people and put more than five million people in distress.

The opposition slammed Modi saying he was more interested in toppling the government in Maharashtra than the condition of flood-devastated Assam.
And on Thursday (23), when Modi tweeted about the situation in Assam and praised Sarma saying his government was working round the clock to help the flood victims, Divya Spandana, an actor from the southern Indian state of Karnataka and a former parliamentarian of the Indian National Congress, mocked the prime minister saying Sarma was not working for the flood-hit areas and instead went to the Radisson Blu hotel in Guwahati in Assam where the Sena legislators took refuge.

No sir the CM is in Radisson Blu hotel in Guwahati with Sena MLA’s https://t.co/eJcWmDpppV

The Twitterati was not impressed with Divya Spandana who is also known as Ramya.

One user shared a video of Sarma visiting a flood-hit area in a boat and wearing a life jacket, asking whether he was moving around in Radisson Blu swimming pool.

There were other users who also targeted Ramya.

No madam he is doing his job.Not in any hotel https://t.co/jGgHjCSepV

@divyaspandana She is also with him inside the hotel. Divyaspandana was the only person who was taking snap of 42 MLA’s & making videos of all. I request all reporters to contact her for any update. Bcs you all are outside but she is inside with Assam CM.

As many as 70 rooms were booked at the five-star hotel for the revolting Sena legislators.