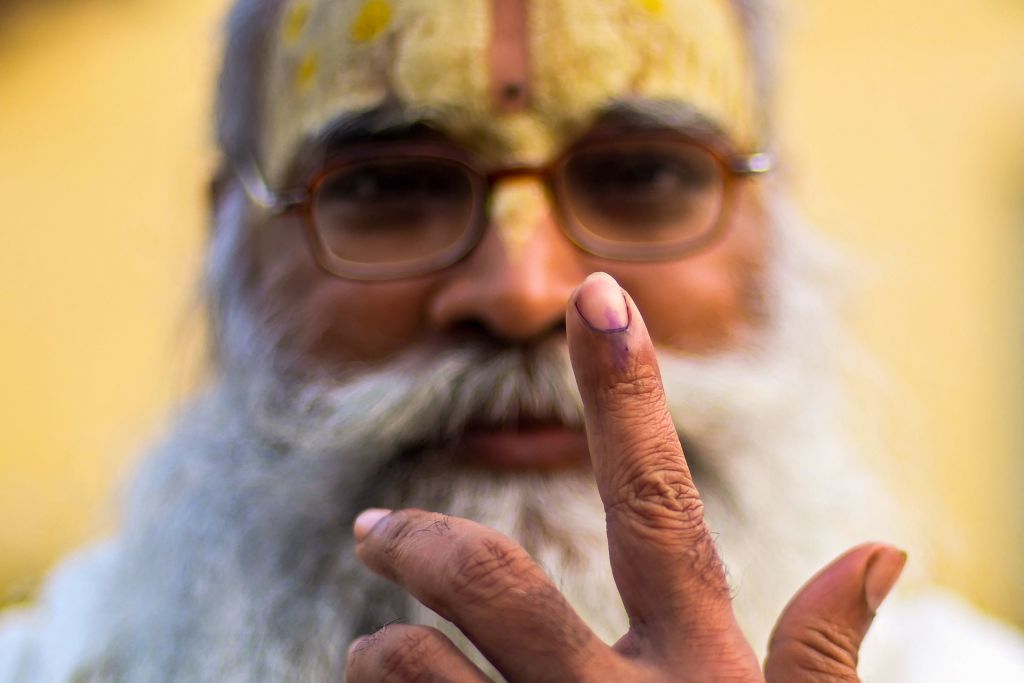 A Hindu religious man shows his inked finger after casting his ballot at a polling station in Vrindavan in the northern Indian state of Uttar Pradesh on February 10, 2022. (Photo by MONEY SHARMA/AFP via Getty Images)

UTTAR PRADESH, India’s most populous state with 204 million people and also a key one politically, saw its assembly election kicking off on Thursday (10).

Fifty-eight of the state’s 403 constituencies went to polling in the first of the seven phases and the results that will be announced on March 10 will be important for prime minister Narendra Modi and his ruling Bharatiya Janata Party (BJP) in the build-up to the national elections in 2024.

The BJP is also in power in Uttar Pradesh, a state which they swept in 2017, and is looking to return this year. Yogi Adityanath, the state’s chief minister, is often promoted as a poster boy of the Hindu nationalist party and a likely successor to Modi and the 2022 polls will be a key determinant of the monk-politician’s political career as well.

The BJP has done well in Uttar Pradesh in both state (2017) and national elections (2014 and 2019) and it has helped them to remain in power nationally. Modi, who will be seeking his third consecutive term in 2024, will hope that his party does well in the bellwether state this year too. It was no surprise that the top brass of the BJP, including the prime minister whose constituency Varanasi falls in UP, did an aggressive campaigning in the state.

People were seen casting their votes in the seats that featured in the first phase. In Vrindavan, a Hindu holy city located around 160 kilometres south of India’s capital New Delhi, saffron-clad monks braved the winter cold to stand in the queue to exercise their suffrage.

“If people want to have a good government, then they have to come out to vote,” 41-year-old Acharya Udit Narayan Diwedi told Reuters. He also said that he voted for the BJP.

Although Modi continues to be a popular leader in India, the chronic problem of unemployment and his government’s handling of the Covid-19 pandemic last year are issues that have posed some uneasy questions to his government.

The agricultural reform laws that Modi’s government withdrew last November in the face of a relentless resistance from farmers in a number of states in North India could also leave an impact on the polls.

Besides Uttar Pradesh, other northern states such as Punjab and Uttarakhand and the western state of Goa and the north-eastern state of Manipur are also going to polls this season. Another northern state Himachal Pradesh and Modi’s home state Gujarat are set to go to polls towards the end of this year.
Experts feel that if the BJP loses the Uttar Pradesh elections, it will be a big setback.

Big setback if BJP loses in UP: Expert

“If the BJP loses, especially in UP, that will be a big setback,” Rahul Verma, a fellow at New Delhi-based think-tank Centre for Policy Research, told Reuters.
“But you can call this a semi-final. The game in 2024 will be very, very different,” he added.

In India, national elections are fought more on pan-Indian issues and around national leaders while regional issues and leaders play a more decisive role in state elections.

Modi and his party, however, would feel more comfortable than the main opposition party – the Indian National Congress. Once a strong player in Uttar Pradesh, the grand-old party has been out of power in that key state for several decades now and finished with single-digit seats in the 2017 elections.

This year, Priyanka Gandhi Vadra, the great grand-daughter of India’s first prime minister Jawaharlal Nehru and daughter of Congress interim president Sonia Gandhi, is leading the party’s mission. Of the five states that are going to the polls, the Congress is in power only in Punjab.

“Congress desperately needs to win states, even if it’s smaller states, just to get back in the habit of winning. Otherwise they are in trouble,” Verma added.
The party has already been plagued by deep internal feud, as has been seen in Punjab where an experienced chief minister in Captain Amarinder Singh quit the post and the party just months ago, formed a new party and joined hands with the BJP.

More failure would also raise more questions over the leadership of Rahul Gandhi, the former president of the Congress who has struggled to match Modi’s appeal in current-day politics in India.

The BJP has appealed to large Hindu majorities in states such as Uttar Pradesh and Uttarakhand in the campaigning period. Both the states have important holy sites, some of which are disputed by the Hindus and Muslims and that adds to the BJP’s favourite ploy of political polarisation.

The BJP will remain favourites to win the all-important elections in Uttar Pradesh and that will leave its fragmented opposition with more reasons to feel worried ahead of the great battle of 2024.