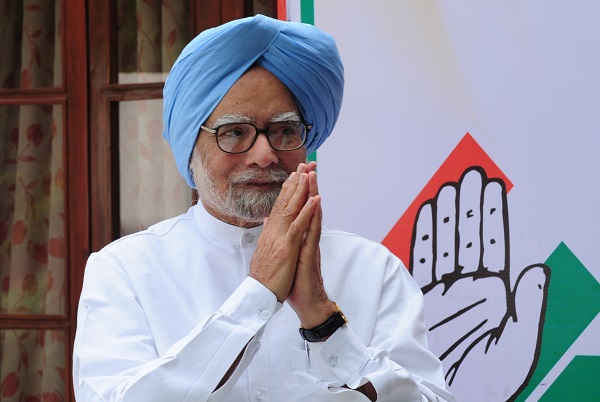 The former prime minister also called Modi’s Pakistan policy “slipshod”, which he said was marred by a series of “flip-flops” from going to Pakistan uninvited to inviting “rogue” ISI to the Pathankot air base in connection with the probe into a terrorist attack (Photo: MONEY SHARMA/AFP/Getty Images).

PRIME MINISTER Narendra Modi should be shown the exit door as his five-year rule has been “most traumatic and devastating” for India’s youths, farmers, traders and every democratic institution, his predecessor Manmohan Singh said Sunday, noting that the “will of one person” cannot be imposed on a diverse country like India.

Singh, in an exclusive interview, dismissed the notion that there was a wave in favour of Modi and asserted that the people have made up their minds to vote out the government that “does not believe in inclusive growth and is only worried about its political existence at the altar of disharmony”.

In one of his most fierce attacks on the Modi dispensation, Singh alleged that the past five years only witnessed “stench” of corruption peaking to “unimaginable proportions”, adding demonetisation was perhaps the “biggest scam” of independent India.

Incidentally, the BJP campaign in the run-up to the 2014 elections had centred on various alleged scams, including in the allocations of 2G spectrum and coal blocks, during the 10-year tenure of the Singh-led UPA government.

The former prime minister also called Modi’s Pakistan policy “slipshod”, which he said was marred by a series of “flip-flops” from going to Pakistan uninvited to inviting “rogue” ISI to the Pathankot air base in connection with the probe into a terrorist attack.

He said India’s foreign policy has always been guided by national interests and not for “image building of any individual”.

Singh, known as the architect of India’s economic reforms in the 1990s, cited latest GDP figures to claim the country is headed for a slowdown and accused the Modi regime of leaving the country’s economy in “dire straits”.

He said people are “fed up” with the daily rhetoric and cosmetic change by the current dispensation and there is an undercurrent against this “illusion and boastful self-aggrandizement”.

In a bid to counter the BJP’s focus on the issues of nationalism and terrorism in this election, the former prime minister also sought to question Modi’s commitment.

He said it was “distressing” that Modi was “filming movies” in the Jim Corbett National Park instead of chairing any meeting of the Cabinet Committee on Security (CCS) in the immediate aftermath of the Pulwama terror attack in which 40 CRPF personnel were killed.

He claimed the “gross intelligence failure” in Pulwama speaks volumes about this government’s preparedness to tackle terror.

“Let’s not forget that Narendra Modi’s slipshod policy on Pakistan has been marred by a series of flip-flops- from going to Pakistan uninvited to inviting the rogue ISI to investigate the Pathankot Air Base terror attack. Does it not speak volumes about the strategic failures of Modi Government on the national security front,” he asked.

Singh said the Modi government’s record on national security is “dismal” as incidents of terrorism have seen a quantum jump.

“A lie spoken a hundred times does not become the truth,” he said on Modi’s plank of nationalism, adding that terror attacks in Jammu and Kashmir alone have gone up.

He said that division and hate have become synonymous with the BJP and it thrives on societal fissures.

“A government which does not believe in inclusive growth and is only worried about its political existence at the altar of disharmony should be immediately shown the exit door,” he noted.

He alleged that in the past five years the stench of corruption has peaked to “unimaginable proportions” and “there is definite collusion of people holding political positions and scamsters who fled the country after defrauding banks”.

Alleging that allegations in Rafale deal have been on those at the highest echelons of power, he said, “If there is nothing wrong in Rafale deal, why has Shri Narendra Modi not agreed to an investigation by a JPC?”

Referring to economic offenders like Nirav Modi and Mehul Choksi, Singh alleged, “There is a definite collusion of people holding political positions and these scamsters.”

He claimed one of the reasons for the BJP’s loss in Madhya Pradesh, Rajasthan and Chhattisgarh, was “rampant” corruption.

Singh said the BJP is searching for new narratives every day, reflecting the bankruptcy of a national security vision.

“Five years of Modi government is a sad story of governance and accountability failure. In the year 2014, Modiji came to power on the promise of ‘acche din’. His five years rule has ended up being the most traumatic and devastating for India’s youth, farmers, traders, businesses and every democratic institution,” he said.

“Our socio-political ambience has lost cohesiveness. People are fed up with the daily loud rhetoric of cosmetic change. There is a sense of deep despair and disillusionment amongst the masses. People have made up their minds to reject the Modi Government and the BJP so that the future of India is safe and secure,” Singh said.

The former prime minister said one man would not do any justice to the aspirations and hopes of the people by imposing his thought process and will on all.

“Representation in India is very important. A single man can neither represent all the desires of 1.3 billion people of India and can also not solve the variety of problems faced by them. The idea of ‘one man as the monolith of knowledge’ cannot be applied to India,” he said on whether a presidential form of election is good for democracy.

He also alleged that the Modi government’s foreign policy lacked “a mature comprehension of diplomacy”.