My father: The Editor’s Editor 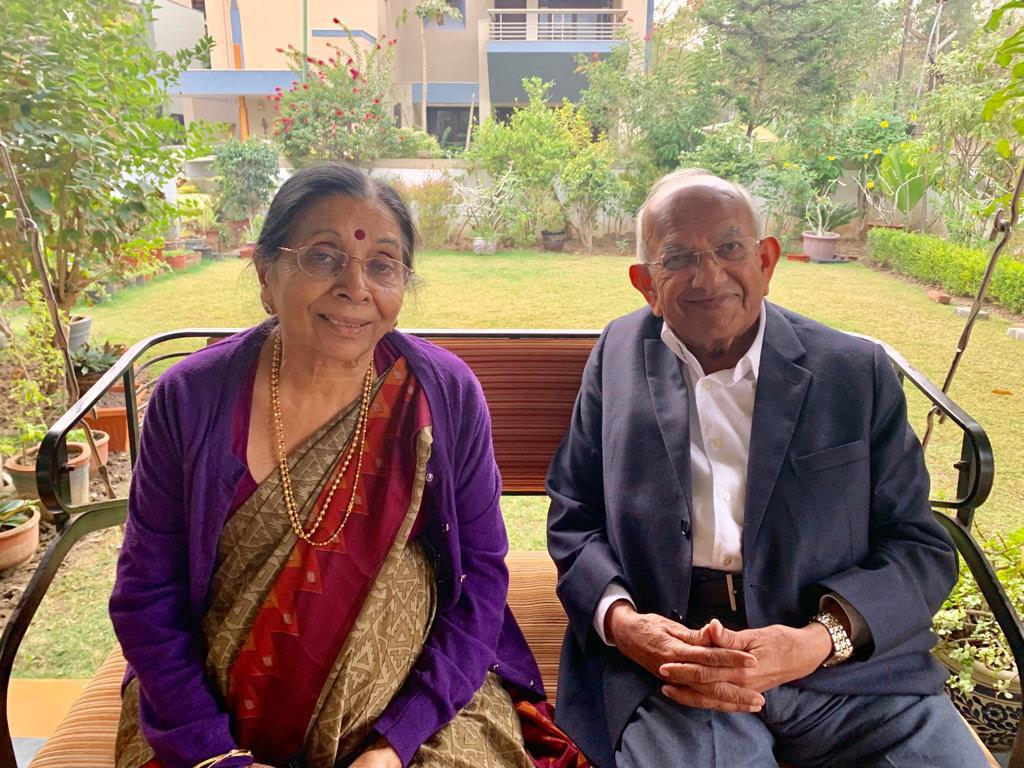 Mr Solanki with his wife of 64 years, Parvatiben

THIS is a tribute I never thought I would have to write or indeed ever wanted to write. It is the most difficult of assignments, but it is one my father would never have shirked.

For my brother Kalpesh, sister Sadhana, late sister Smita and I, Ramniklal Solanki was not just our father, he was our mentor, friend and guide. He was a colossal figure not just in our lives but in the world of journalism.

He was AMG’s editor-in-chief and a man utterly dedicated to his work, who, with our mother Parvatiben, pioneered ethnic journalism in the UK with the launch of Garavi Gujarat newsweekly in 1968.

The manner in which our parents launched the paper at a time when there were very few Indians in the UK, with no financial capital and when the technology to publish a Gujarati language newspaper did not exist in the UK, is an epic and inspiring story of triumph against the odds.

Garavi Gujarat was his baby; it was, in essence, his fifth child, which he nurtured and built into the biggest-selling Gujarati title outside of India. Today that paper, which our parents launched as a black and white, cyclo-styled newssheet from the front room of our small terraced house in Wembley, north London, is published weekly in two editions in the UK and USA and read all over the world.

Garavi Gujarat was his pride and joy and it was his mastery of the written word that made the paper so successful and command a loyal following worldwide.

He was a prolific writer and creative genius. He had a finely honed antenna for news – he would often say that ‘you have to have a nose for the news’ – and this he had in abundance, developing and evolving news stories and instinctively knowing how to draw the reader in.

The art of journalism he always said was to use simple language and unpack complex subjects into readable and easy-to-understand stories. His columns in the 1970s, dissecting tough new immigration laws, helped thousands of Asians settle in this country. He even made the time to give personal advice to his readers when they called.

His journalism touched many lives. His campaigns against injustice and unfair laws, and investigations into wrong doing had a profound and positive impact on the British Asian community. He was their voice and he amplified that voice at the very highest levels.

From helping Ugandan Asians settle in the UK to opposing the British government’s detestable virginity tests for Asian wives wanting to settle with their spouses, to fighting racism and discrimination at all levels of British society, my father’s bold, fearless journalism paved the way for a more fair and equitable society. That path is still being travelled but his journalism has taken us a considerable way further down the road. 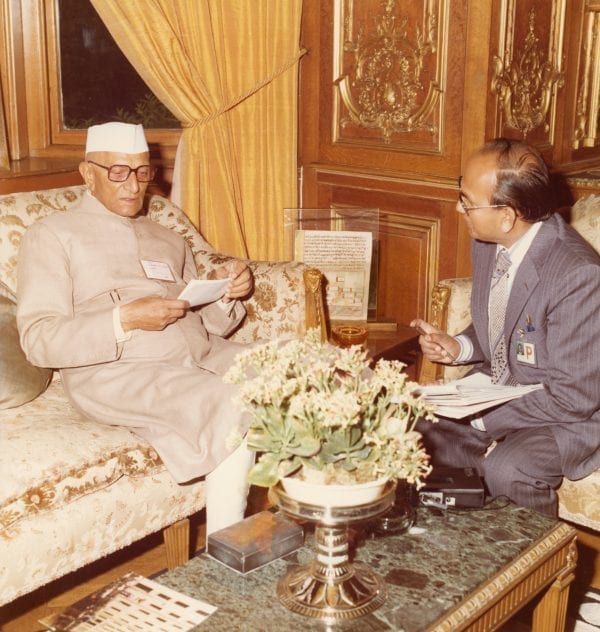 A fiercely independent editor, he was not beholden to any political party, cause or business.

He was one of the most courageous men we knew. He never shied away from taking a tough line, challenging extremism in all its forms with strident editorials and putting his own life in danger in resolving the murder of Rukaya Bibi in 1971. That brilliant exposé would win him the reporter of the year award in Gujarat and commendation from the Metropolitan Police deputy commissioner.

My siblings and I often wondered where he drew his strength from. It was simply his unshakable faith in the Almighty. He was a deeply religious man and left his fate in God’s hands.

‘If you work with a pure heart, God will always be with you,’ he would say to us.

Religion played a large part in his work. Religious leaders from India frequently visited Garavi Gujarat House in central London and our home, a privilege he always cherished.

He had a special bond with leaders such as HH Pujya Swami Chidanand Saraswatiji, HH Satyamitranand Giriji and HH Param Pujya Pramukh Swami Maharaj who graced the cover of Garavi Gujarat on numerous occasions. My father felt truly blessed every time HH Pujya Pramukh Swami showered him with heartfelt blessings.

He held few material possessions and never wore gold, which he gave up for the Indian nation. During a meeting with the then-Indian High Commissioner, Dr Jivraj Mehta, who appealed for funds during the 1965 Indo-Pakistan war, my father immediately donated his wedding ring and vowed never to wear gold again. He held onto this pledge for the rest of his life.

Despite the tough editorial positions he adopted, he was at heart a man of literature and loved the power of words. He marvelled at the majesty of the great poets. His creativity in penning the weekly Subhashit column, a deep philosophical reflection from poems and proverbs related to everyday life, gained a huge worldwide following, with many readers cutting them out for keepsake.

Many of his closest friends were the great Gujarati poets who often spent summers at our London home. Some of our fondest memories are of my father sitting by the imposing weeping willow tree in our garden on a warm summer’s evening reciting poetry with literary giants like Umashankar Joshi, Harindra Dave, Niranjan Bhagat and Suresh Dalal.

He observed a punishing work routine, rising at 5 am to write and often working late into the evenings rewriting copy, correcting grammar and tweaking headlines. But it was never punishing to him. ‘Work is worship’ he would tell us when we told him to slow down. He never had an idle moment and always had a pen, newspaper or book in his hands – his beloved readers were always top, bottom and central to his mind.

He believed he had a duty to his readers and preferred to perfect his craft than pick up a microphone or take to the airwaves. He was the editor’s editor, a perfectionist to the core who would constantly adjust and refine final page proofs before print deadlines.

He was equally at ease meeting prime ministers, film stars, CEOs and ordinary readers. Nothing would give him more pleasure than to meet a reader at community events who would invariably comment on the paper.

As the community progressed and made their presence felt in different areas, he had the prescience to launch new titles to serve this aspiring new breed of businesses. Asian Trader, Pharmacy Business and Asian Hospitality all came to dominate these nascent sectors.

He created new special events to celebrate and bring recognition to the Asian community when it was unfashionable to do so, creating the Asian Trader Awards in 1989, the GG2 Leadership Awards in 1999 and the Pharmacy Business Awards in 2000. Many more events followed, but his was a pioneering concept that came to be copied, but never quite emulated.

New markets beckoned and a US edition of Garavi Gujarat was boldly launched in 1992 to serve the Gujarati community in North America.

Despite all his success he remained a modest and humble man. He never took credit for his many considerable achievements, viewing his work simply as his duty.

Behind the consummate journalist was the family man. First and foremost was his beloved wife Parvati, with whom he shared his remarkable journey with for over 64 years of marriage. Hand in hand my parents created and built a media enterprise that was to grow to become the country’s biggest Asian publishing house.

But they were so much more than that. They shared a deep and abiding love, adored each other and were inseparable. Each day when my father rose in the early hours to write, he would make special masala tea for my mother, which they shared religiously every morning. He was ever the romantic and showered my mother with surprise gifts. He never missed an anniversary or a birthday.

He was a devoted family man. His love was infinite and selfless and he sacrificed so much to give his family and extended family a brighter future. He inspired us by his own life and wisdom, but he also cajoled, encouraged and pushed all his children to achieve to the best of their abilities.

When my sister Smita tragically passed away from leukaemia in 1994, it was a devastating loss which he felt unto his last. But he stayed strong for his family and it was this strength and unrelenting belief in the Almighty that helped us all cope.

And then there were his 11 grandchildren, who were ‘the sweet interest on the capital of his children’. He cherished and loved them all, making each feel special in their own individual way. He took great pride in their progress through university and work and gently encouraged them to do what made them happy, while never forgetting those less fortunate.

For my sister Sadhana, Kalpesh and I, he was a loving father, our hero and our North Star. We are blessed to have had such a humble, selfless soul as our father who always put others before himself.

One of his favourite couplets by the great 15th century Indian poet Kabir, who was a bountiful source for his weekly Subhashit column, beautifully sums up the manner in which he lived his life and the many people whose hearts he touched.

When you were born, you cried and the world rejoiced.

Live your life so that when you die, the world cries and you rejoice.