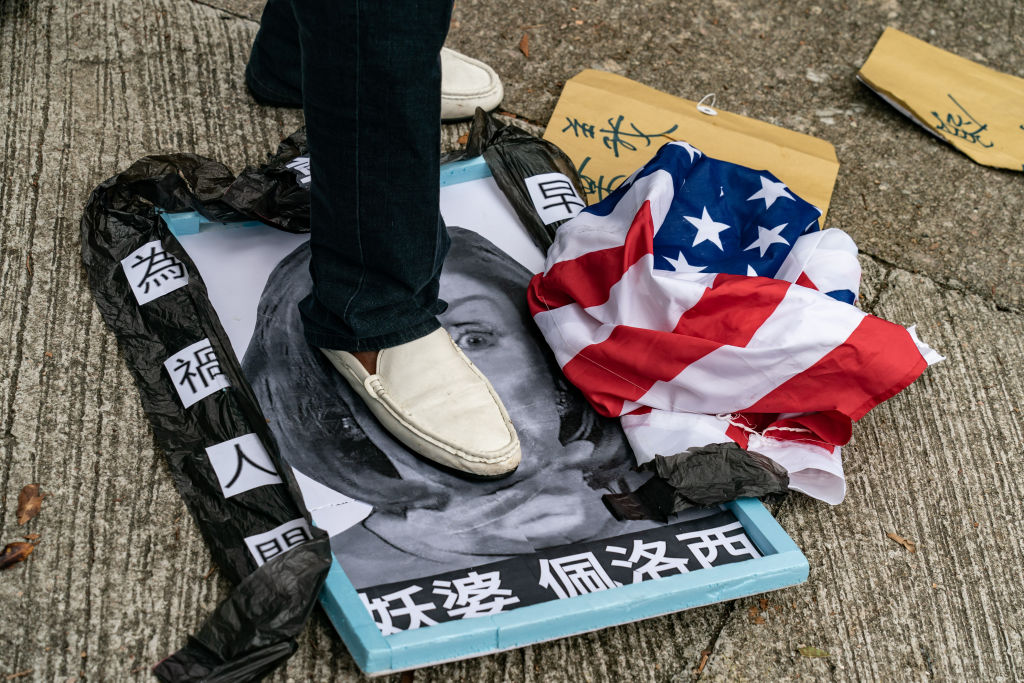 A pro-China supporter steps on a defaced photo of US House of Representatives Speaker Nancy Pelosi during a protest against her visit to Taiwan outside the Consulate General of the United States on August 3, 2022 in Hong Kong, China. Pelosi arrived in Taiwan on Tuesday as part of a tour of Asia aimed at reassuring allies in the region, as China made it clear that her visit to Taiwan would be seen in a negative light. (Photo by Anthony Kwan/Getty Images)

CHINA has summoned the American envoy in Beijing to lodge a stern protest over the high-profile visit of Nancy Pelosi, the speaker of the US House of Representatives to Taipei, warning that Washington will “pay a price” for its “mistakes” and asked it to stop using the Taiwan issue to contain China in any form.

Bristling with anger over Pelosi’s visit to Taipei, China also carried out live-fire missile drills in Taiwan Straits besides flying a number of Chinese fighter jets near Taiwanese airspace.

Chinese vice foreign minister Xie Feng “urgently summoned” the US Ambassador to China Nicholas Burns late Tuesday (2) night and lodged stern representations and strong protests over Pelosi’s visit, the highest by a top US leader to Taipei in 25 years.

China views Taiwan as a breakaway province which will one day unite with it.

Beijing has not ruled out the possible use of force to reunify the self-ruled island with the mainland. Noting that the US side shall “pay the price” for its “mistakes” for going ahead with the visit disregarding stern warnings from Beijing, Xie urged the US to immediately address its wrongdoings, take practical measures to undo the adverse effects caused by Pelosi’s visit to Taiwan, state-run Xinhua news agency reported.

The US must not go further down the wrong path, escalating tensions and making the situation across the Taiwan Strait and China-US relations irreparable, Xie said.

He added that the US should stop playing the “Taiwan card”, stop using Taiwan to contain China in any form, and stop interfering in China’s internal affairs.

Stating that Pelosi risks universal condemnation for deliberately provoking and playing with fire, Xie said this is a serious violation of the one-China principle and the three China-US joint communique.

“The move is extremely egregious in nature and the consequences are extremely serious. China will not sit idly by,” Xie said. The visit has a severe impact on the political foundation of China-US relations, and seriously infringes on China’s sovereignty and territorial integrity, he said, adding that it gravely undermines peace and stability across the Taiwan Strait, and sends a seriously wrong signal to the separatist forces for “Taiwan independence”.

Xie said the US government must be held accountable as it says one thing and does another constantly distorting and hollowing out the one-China principle. “The US has deleted key expressions such as Taiwan is part of China from the state department website, put Taiwan in its so-called ‘Indo-Pacific strategy’, openly upgraded its ties with Taiwan and increased arms sales to the region and supported separatist activities for ‘Taiwan independence’,” he said.

“Our visit is one of several Congressional delegations to Taiwan -– and it in no way contradicts long-standing United States policy,” the 82-year-old leader said. “By travelling to Taiwan, we honour our commitment to democracy: reaffirming that the freedoms of Taiwan — and all democracies — must be respected,” she added.