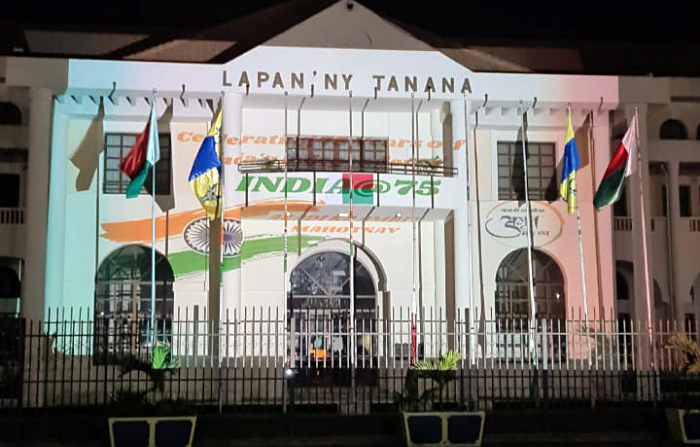 A view of the iconic town hall in Antananarivo, Madagascar, illuminated with the colours of the Indian Tricolour on the eve of the 75th Independence Day Celebration on Aufust 15, 2021. (ANI Photo)

INDIA will complete 75 years of independence next year and in the run-up to that, Azadi Ka Amrit Mahotsav is being observed. As part of the celebrations, the Indian embassy in Antananarivo, Madagascar, is observing the age-old Indian philosophy of ‘Vasudhaiva Kutumbakam’ (the whole earth is a family) in the month of September.

Indian ambassador to the African nation Abhay Kumar delivered the welcome remarks at the celebrations of 57th Indian Technical and Economic Cooperation (ITEC) Day earlier this month where he emphasised the essence of ‘Vasudhaiva Kutumbakam’ saying “it is one of the core philosophies of the Indian civilization since ancient times and ITEC is a living example of the practice of this philosophy.

The embassy organised a painting competition on the theme of ‘Vaudhaiva Kutumbakam’ to mark the occasion.

The winners were declared on Monday (28). The first prize was won by Upasi Vaidya, the second prize by Mialisoa- Maya Ramiharimiadana and the third by Natoa Rasolonjatovo.

The embassy building was lit up with a special projection of ‘Vasudhaiva Kutumbakam’ on the evening of September 28. The winning entries of the painting competition were also projected on the building.

Madagascar’s celebrated Valiha player Germain Randrianrisoa (aka Rajery), one of the members of the contemporary African music group 3MA and a living music legend of the African nation-island, spoke about the importance of the philosophy of ‘Vasudhaiva Kutumbakam’.

Ambassador Kumar also wrote an article highlighting the meaning and significance of ‘Vasudhaiva Kutumbakam’ and how India’s worldview is guided by this ancient Indian philosophy from Maha Upanishad.