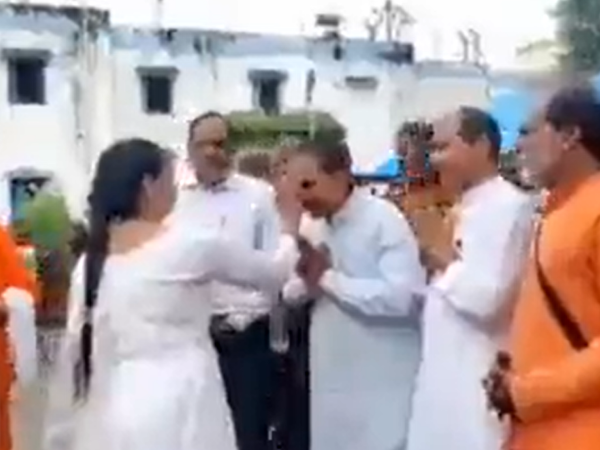 A woman in Gujarat welcomes one of the 11 men convicted in Bilkis Bano rape case who were released from jail on Monday, August 15, 2022. (Picture: Twitter @itsmeKNR)

The social media in India erupted on Wednesday (17) after pictures of eleven men, convicted in the Bilkis Bano rape case during the Gujarat pogroms of 2002, were greeted with garlands and fed sweets at the office of the Hindu right-wing Vishwa Hindu Parishad in Ahmedabad after the remission policy of the state’s Bharatiya Janata Party government saw them coming out of jail.

However, while pictures and videos of the convicts’ felicitation (people giving them sweets were also seen touching their feet for blessings) did the rounds, there was also one picture showing some women welcoming them which left the netizens shocked.

These women here have violated Bilkis Bano as much as these men have. pic.twitter.com/kio79W7eb9

They raped Bilkis Bano, her mother, her sisters, killed her daughter and 5 yrs into their conviction, these 11 men have been released by BJP Govt because victims were all Muslims.

The rise in crime against women & the Muslims in India is backed by the BJP Government. Period! pic.twitter.com/lhIeUyKE0T

The convicts, who were given life sentence over the gangrape two decades ago, walked out of the Godhra sub-jail on Monday (15). A special Central Bureau of Investigation (CBI) court in Mumbai had in January 2008 sent the 11 accused to life imprisonment over charges of gangrape and murder of seven members of Bano’s family. The conviction was later upheld by the Bombay High Court.

One of the convicts approached the Supreme Court of India with a plea for his premature release after serving the jail term all these years and the top court asked the Gujarat government to look into the issue of remission of his sentence. The government then formed a panel and eventually they were released.

Indian prime minister Narendra Modi was the chief minister of Gujarat when the riots took place.

Indian National Congress leader Rahul Gandhi on Wednesday launched a scathing attack on prime minister Modi over the release of the Bano rape convicts saying the entire country was seeing the difference between the latter’s words and deeds.

He asked what message is being sent out to the women of the country through such decisions.

“Those who raped a five-month pregnant woman and killed her three-year-old daughter were released during ‘Azadi ka Amrit Mahotsav’. What message is being given to the women of the country by those who peddle lies about ‘Nari Shakti’?

“Prime Minister ji, the entire country is seeing the difference between your words and deeds,” Gandhi said in a tweet in Hindi.

It was on the same day that Modi spoke about women power and honouring of women in his speech delivered from the ramparts of the Red Fort on the occasion of India’s 76th Independence Day.