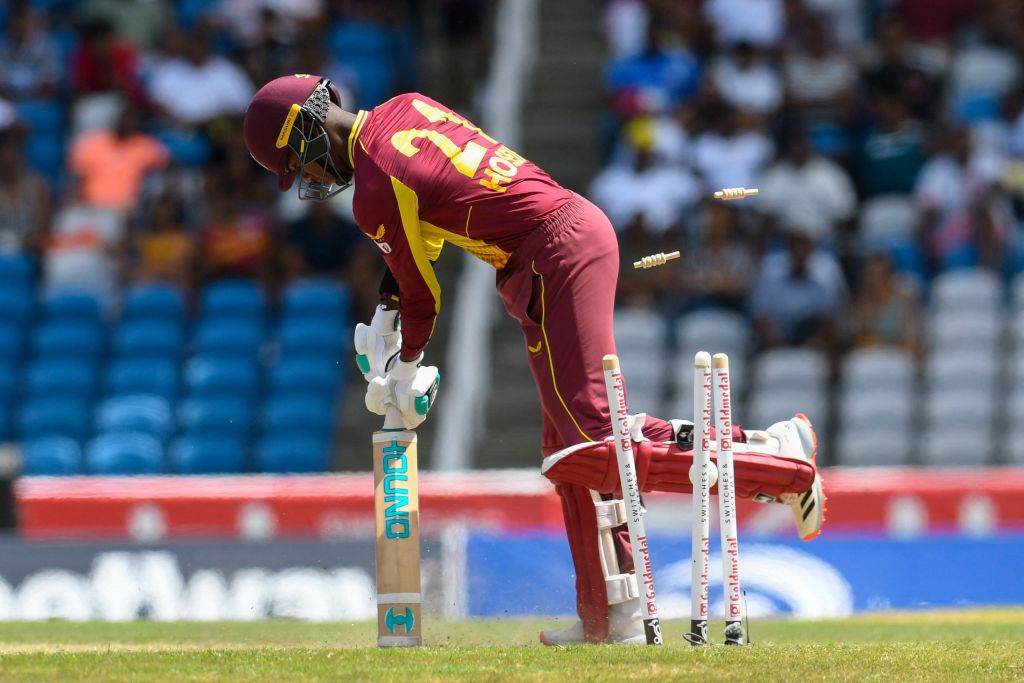 Akeal Hosein of the West Indies gets bowled by India’s Arshdeep Singh in the 1st T20i match between West Indies and India at Brian Lara Cricket Academy in Tarouba, Trinidad and Tobago on Friday, July 29, 2022.(Photo by RANDY BROOKS/AFP via Getty Images)

INDIA extended their white ball dominance over the West Indies with a comprehensive 68-run victory in the opening fixture of a five-match T20 International series at the Brian Lara Stadium in Trinidad on Friday.

Fresh from a 3-0 sweep of a One-Day International series at Queen’s Park Oval, the tourists were at their most dominant in posting a formidable 190 for six batting before easily restricting the home side to 122 for eight in reply.

Captain Rohit Sharma, one of a handful of first-choice players rested from the ODI matches, laid the foundation for his team’s total with a top-score of 64 off 44 balls with seven fours and two sixes highlighting the opener’s composed effort.

Dinesh Karthik then gave the innings important late impetus with an unbeaten 41 off just 19 balls, his unbroken seventh-wicket stand of 52 with Ravi Ashwin in the last four overs seeming to drain the West Indies’ enthusiasm in the sweltering midday heat.

Karthik’s contribution earned him the man of the match award.

“The way we finished off the innings was great because we needed to hang in there and get more than just a par score,” said Sharma after the match in paying tribute to Karthik’s late surge.

“We also want keep on trying different things at various stages of the innings to improve our overall game.”

Pacer Alzarri Joseph claimed two expensive wickets but Akeal Hosein was by far the pick of the Caribbean bowlers.

He conceded just 14 runs across his four overs in which he claimed the first wicket of the match when Suryakumar Yadav was bowled after dominating an opening stand of 44 with Sharma.

A similarly rampaging start to the West Indies’ chase by Kyle Mayers and Shamarh Brooks – they belted 22 runs off the first eight balls of the innings – proved deceptive as seamer Arshdeep Singh dismissed Mayers for one of his two wickets.

Spinners Ashwin and Ravi Bishnoi also had too much guile in picking up two wickets each against a West Indies batting line-up which struggled to build any sort of momentum.

Brooks’s 20 was the best effort of a mediocre batting performance, leaving West Indies captain Nicholas Pooran to contemplate on yet another implosion by his team, two days after being thrashed by 119 runs in the last match of the ODI series.

“We were indisciplined and we paid the price. The guys know that,” said Pooran.

“We lost wickets every time we had momentum and that cost us.”