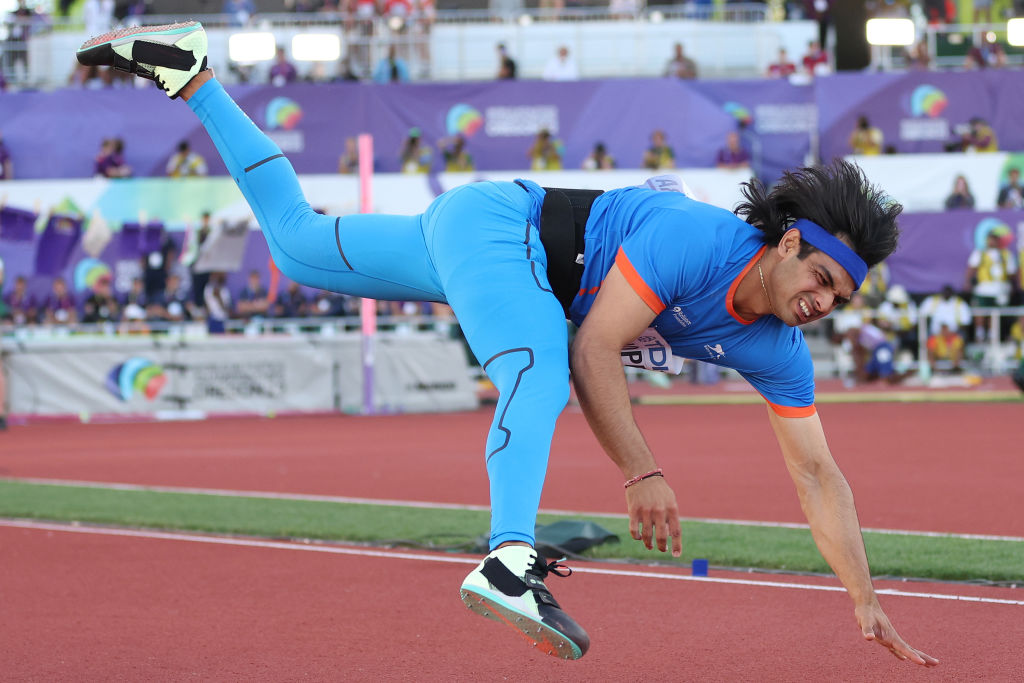 India’s Neeraj Chopra competes in the Men’s Javelin Throw Final on day nine of the World Athletics Championships Oregon22 at Hayward Field on July 23, 2022 in Eugene, Oregon, the US. (Photo by Patrick Smith/Getty Images)

IN a news that would leave India’s sports lovers with a broken heart, ace javelin thrower Neeraj Chopra is all set to miss the upcoming Commonwealth Games 2022 because of an injury concern. He was one of the South Asian nation’s brightest medal hopefuls at the sporting event which will kick off on Thursday (28).

Chopra, who won gold at the Tokyo Olympics last year and recently bagged silver at the World Athletics Championships in the US, said after the event that he picked up a groin injury during the 12-man final. The 24-year-old also said that a decision on his participation in the Commonwealth Games would be taken following medical assessments of his injury.

“… I kept improving my throws throughout, but during the fourth throw, I felt pain in my groin, so I could not give everything in the last couple of throws. But I am happy with what I have done,” Neeraj was quoted as saying by India Today after he won the silver.

Struggled a bit with the conditions, but extremely happy to win a 🥈medal for India at the #WCHOregon22. Congratulations to Anderson Peters and Jakub Vadlejch on an incredible competition.

Thank you to everyone at home and at Hayward Field for your support. 🇮🇳 pic.twitter.com/co2mGrx3Em

“Our Olympic Champ @Neeraj_chopra1 will not be defending his title at @birminghamcg22 due to concerns regarding his fitness. We wish him a speedy recovery & are supporting him in these challenging times,” the Indian Olympics Association said in a statement on social media.

Chopra had won gold at the previous edition of the Commonwealth Games which was held in Gold Coast, Australia, in 2018. He has also won gold at the Asian Games held in Jakarta, Indonesia, later that year.

IOA secretary Rajeev Mehta said Chopra has been advised a month’s rest by his doctors following an MRI scan.

“Team India javelin thrower Mr. Neeraj Chopra had called me earlier today from the US to convey his inability to take part in the Birmingham 2022 Commonwealth Games owing to fitness concerns. Following his participation in the 2022 World Athletics Championships in Eugene, Mr. Chopra had an MRI scan done on Monday and, based on it, he has been advised a month’s rest by his medical team,” Mehta was quoted as saying.

The sporting world awaited another blockbuster clash between Chopra and Anderson Peters of Grenada who won silver at the World Athletics Championships. In the Commonwealth Games 2018, Anderson finished with bronze.