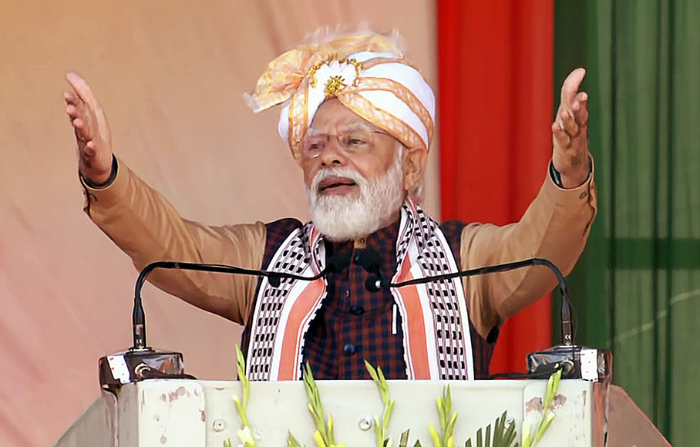 Indian prime Narendra Modi addresses a rally in Imphal in the northeastern Indian state of Manipur on January 4, 2022. (ANI Photo)

INDIAN prime minister Narendra Modi on Tuesday (4) said the country’s northeastern states will become major drivers of growth in the coming years with Manipur as the main source of the growth trajectory.

Modi said this while addressing an inauguration programme of development projects in Imphal, the capital of Manipur which will go to polls in a few months.

The northeastern state is also set to complete 50 years of statehood on January 21.

Modi said the state “will become the main source of India’s growth trajectory and will stretch its potential to other parts of India via enhanced road connectivity and infrastructure projects”.

Stressing that the northeast is all set to become the “new gate of development” for the country, Modi said, “The northeast, where Netaji Subhash Chandra Bose’s army hoisted the flag for the first time calling it the gateway to India’s independence, is now becoming the gateway to fulfil the dreams of New India.”

He inaugurated and laid the foundation stone of several developmental projects here on Tuesday.

He also laid the foundation stone of construction of five national highway projects to be built at a cost of more than Rs 1,700 crore (£168 million), with a cumulative length of more than 110 kilometres.