NRC Not A Threat To Citizenship Of Indians: Naqvi 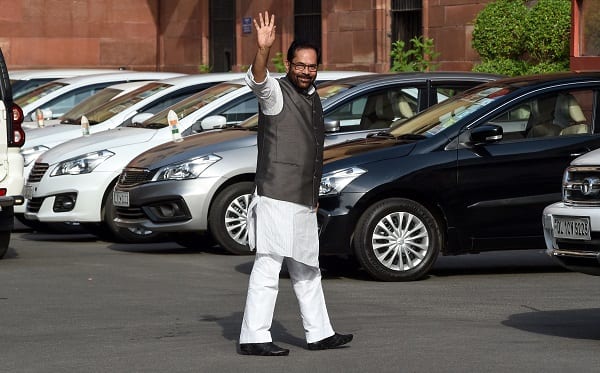 “No nation can afford illegal population explosion. The issue of illegal immigration has been there for a long time. People have been against the infiltration of foreigners for a long time. We cannot ignore it,” Naqvi said (Photo: MONEY SHARMA/AFP/Getty Images).

THERE should not be an atmosphere of “confusion or fear” over the National Register of Citizens (NRC) as it does not pose a threat to the citizenship of Indians, senior BJP leader Mukhtar Abbas Naqvi said on Tuesday, asserting there will be no discrimination in identifying illegal immigrants.

Naqvi, while interacting with people at a ‘Jan Chaupal’ in Rampur, said people will get several opportunities to prove their citizenship.

It is unfortunate that some individuals with vested interests are trying to create an atmosphere of “confusion, fear and panic” over the NRC issue, the Union minister of minority affairs said.

“We should remain cautious of the conspiracy of such elements,” Naqvi said in a statement issued by his office.

The Modi government’s intention is to identify illegal immigrants, he said.

“No nation can afford illegal population explosion. The issue of illegal immigration has been there for a long time. People have been against the infiltration of foreigners for a long time. We cannot ignore it,” Naqvi said.

The rights of true citizens should be protected at all costs, he asserted.

The NRC process has been going on under the guidance of the Supreme Court from 2013, the minister said.

In Assam, the only state in the country where the exercise was carried out to update the NRC, names of over 19 lakh people were omitted from the final list which was published on August 31.

BJP leaders have indicated that the NRC could be carried out in other states such as Karnataka and Haryana.

There should not be any “communal politics” over the NRC issue, Naqvi said.

The Modi government considers the NRC issue purely as a matter related to national security and national interest, the Union minister said.

The government has been working towards development, empowerment and national security with complete honesty, he added.

“Our government is moving forward with the commitment to inclusive growth and development without discrimination,” Naqvi said.

Prime Minister Narendra Modi took many historic decisions such as abrogating the special status of Jammu and Kashmir which the people of the country had been waiting for 70 years, he said.

Strengthening national security by amending the Unlawful Activities (Prevention) Act is the result of the nationalistic will of Prime Minister Modi, the minister said.