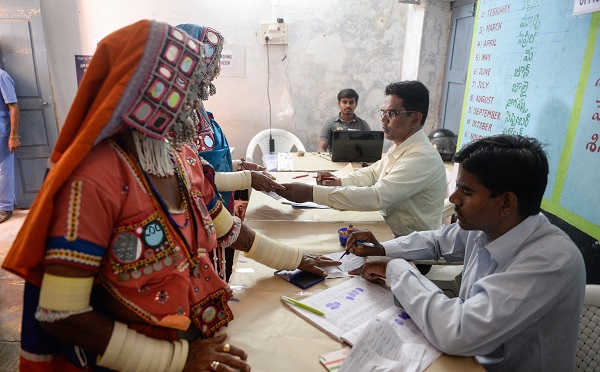 A polling officer marks the finger of Indian lambadi tribeswomen before they vote at a polling station during India’s general election at Pedda Shapur village on the outskirts of Hyderabad on April 11, 2019 (Photo: NOAH SEELAM/AFP/Getty Images).

AFTER seeking entry into the Guinness Book of World Records, poll authorities in Telangana have now approached the Indian School of Business (ISB) here to develop a case study for students in supply chain management, based on the conduct of elections in Nizamabad parliamentary constituency.

As many as 185 candidates including,178 farmers jumped into the poll fray in Nizamabad Lok Sabha constituency to support their demand for a remunerative price for turmeric and red sorghum and setting up of a Turmeric Board.

In view of a large number of contestants, the Election Commission had to press nearly 27,000 Ballot Units into service for voters to exercise their franchise, chief electoral officer Rajat Kumar said.

“In addition to the Guinness Book of World Records, we have also approached the ISB to develop a case study on the Nizamabad elections particularly from the point of view of supply-chain management. It was a very large exercise in terms of logistics. Roughly around 200000 man-hours of work was involved to set up 26820 BUs,” he said.

TRS Rajya Sabha member D Srinivas’s son D Arvind is contesting on behalf of BJP while AICC Secretary Madhu Yashki Goud is in fray from Congress in the segment.

“We had to do a time and motion study what Henry Ford did in early 1900s foris automobiles.      Many innovative processes (arrangement of ballot units in L shape) were involved in the preparation..,” Kumar explained.

Time and motion study is a business technique relating to logistics management.

In view of a large number of contestants, 12 ballot Units were coupled in series and attached to a Control Unit in inverted “L” shape.

The Election Commission used M3 type EVMs which can support up to 24 BUs, the official said.  With regard to the counting preparations for Nizamabad Lok Sabha seat, he said since there are 185 candidates, the clearing of EVM in each round would take a little more time than that of other constituencies.

The EC is using 18 tables for counting instead of normal 14 per constituency.

“I think the round results will definitely take a little more time. We should be able to declare the final results within 24 hours,” he added.

Polls for Nizamabad segment were held in the first phase on April 11.

The counting of votes for all the constituencies in the country including Nizamabad will be held on May 23.