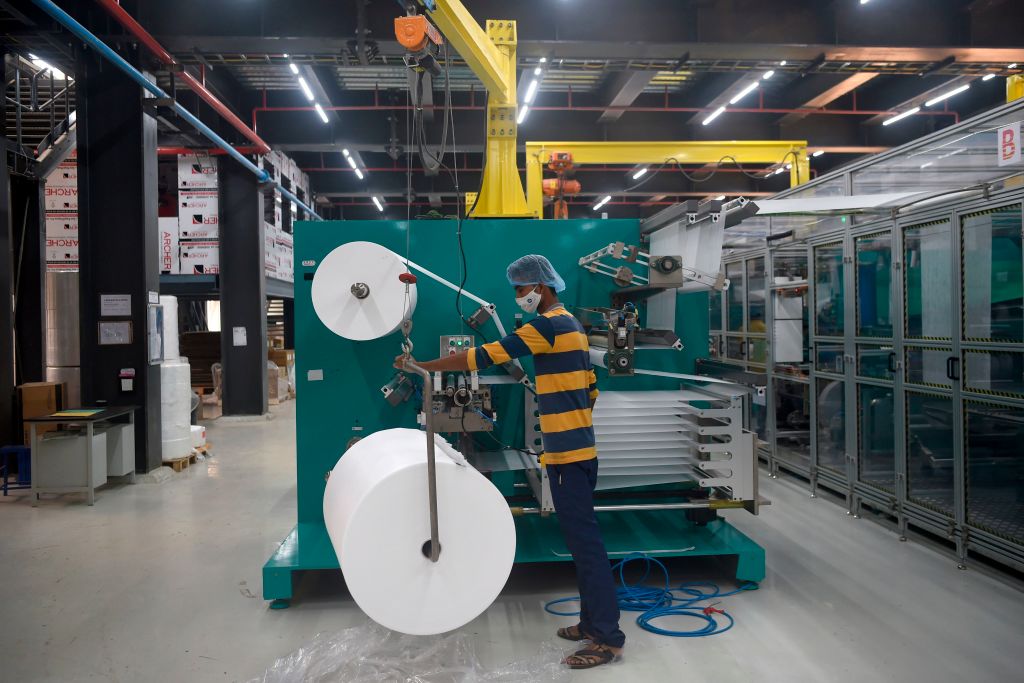 A staff member works on the production line of a diaper manufacturing plant in Sinnar in the Indian state of Maharashtra. (Photo by PUNIT PARANJPE/AFP via Getty Images)

ECONOMISTS polled by news outlet Reuters feel that there is less downside risk to the Indian economy from the Omicron variant of coronavirus in the remaining months of the current financial year.

They also said that the Indian government should focus on fiscal prudence in the upcoming budget on February 1.

India, which is Asia’s third-largest economy, is in the middle of a resurgence in Covid cases driven by Omicron that has forced most states in the country to impose restrictions.

The Reuters poll, which was carried out between January 11 and 18 and covered 45 economists, predicted a five per cent economic growth in the current quarter, low from six per cent given in December and finishing the year at 9.2 per cent compared with 9.5 per cent as was forecast in the previous month’s poll.

However, 21 of 32 of those responding to the poll said there was a limited downside to the outlook for the rest of the fiscal which concludes in March, the poll said.

Nine opined that the economy was at risk of downgrades while two said it was prone to upgrades. The median growth projection for the next fiscal was upgraded to eight per cent from 7.5 per cent a month ago.

“The current phase of restrictions is not as harsh as it was during the previous waves. So, I think Omicron and the economic damage it inflicts is a Jan-March story and will only be limited to this fiscal year,” Madhavi Arora, lead economist at Emkay Global Financial Services in Mumbai in the western state of Maharashtra said.

She said the first quarter of the next financial year beginning in April will get an additional boost once the third wave is behind us, assuming it does.

The poll also predicted an economic growth at 14.7 per cent for the same quarter.

Inflation was expected to peak at 5.8 per cent and then go down, remaining under the Reserve Bank of India’s six per cent upper threshold until at least the end of 2023-24 fiscal, taking pressure off the central bank for future rise in interest rates.

When asked what the Narendra Modi government should focus on, 16 of 23 respondents of the poll said fiscal prudence rather than expansion, despite pandemic-related risks.

“India and other emerging markets will have to start thinking about consolidating their COVID-19 year budget deficits in a global monetary environment where the U.S. Fed is starting to normalise policy,” Miguel Chanco, senior Asia economist at Pantheon Macroeconomics, the UK, said.

“We are expecting quite aggressive tightening from the Fed this year and that is going to raise borrowing costs not just for India but for most Ems,” he added.

India’s federal fiscal deficit surged to 135.1 per cent in the April-November period of the last financial year but in the current year it narrowed to 46.2 per cent for the same period, aided by a rise in tax collections.

The fiscal deficit target for next financial year was predicted to be six per cent, and 5.5 per cent for fiscal year 2023-2024, both lower than this year’s 6.8 per cent.

“They will be pretty conservative with spending and revenue projections,” Robert Carnell, head of Asia Pacific research at ING, Singapore, said.

“It is really more of a revenue worry from Omicron, so I do not think you should be spending on the off-chance that Omicron is bad. Because that sort of bakes in the fact that the targets get missed at that point,” he was quoted as saying.