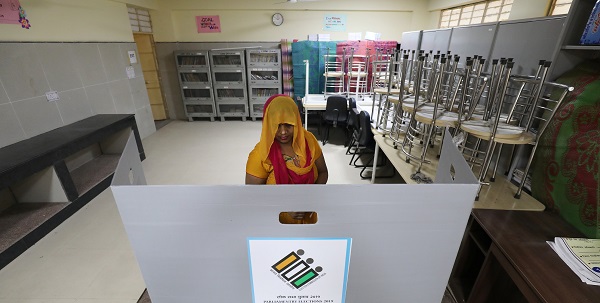 A woman casts her vote at a polling station during the sixth phase of the general election, in New Delhi, India, May 12, 2019 (Photo: REUTERS/Anushree Fadnavis).

INDIAN prime minister Narendra Modi’s ruling coalition is confident of a second term in office but opposition parties are talking to each other to seal an alliance, hoping to topple him after general election results are announced on May 23.

The seven-phase election started on April 11 and ends on May 19. Below is how India’s biggest parties are aligned.

National Democratic Alliance (NDA)
Bharatiya Janata Party (BJP): Modi’s BJP leads the NDA and won 282 seats in the last election five years ago. There are 545 seats in the lower house of parliament, two of which are nominated by the president from the Anglo-Indian community.

All India Anna Dravida Munnetra Kazhagam (AIADMK): The third-biggest party and Modi’s biggest partner in the south of the country, the BJP’s weakest region. The AIADMK won 37 of the 40 seats it contested the last time, but the death of its charismatic leader, J Jayalalithaa, in 2016 could affect its performance.

Shiv Sena: Based in India’s financial capital Mumbai, is in an on-off relationship with the BJP. The parties sealed an alliance before this election, with the construction of a Hindu temple at a controversial site in the north being one of Shiv Sena’s key demands. Shiv Sena won 18 seats the last time, making it the sixth-biggest party.

United Progressive Alliance (UPA)/Likely Partners
Indian National Congress: The main opposition party, which has ruled India for much of its independent history, received a thrashing at the hands of the BJP in 2014, managing to win only 44 of the 464 seats it contested. Congress – headed by Rahul Gandhi, the scion of the Nehru-Gandhi political dynasty – is hoping to win more than 100 seats this time.

All India Trinamool Congress: The party, formed by potential prime ministerial candidate Mamata Banerjee after leaving Congress in 1997, is the fourth biggest in parliament with 34 seats. Banerjee, along with N Chandrababu Naidu of the regional Telugu Desam Party (TDP), is one of Modi’s biggest critics and has been trying to get an opposition alliance going.

Uttar Pradesh sends the highest number of lawmakers to the lower house of parliament of all states, and the parties are expected to do much better than they did the last time. There are 80 constituencies in the state, and the SP won five seats the last time. The BSP drew a blank.

Likely King-makers
Biju Janata Dal (BJD): Based in the eastern state of Odisha, the BJD is currently the fifth-biggest party with 20 seats. TDP’s Naidu has been negotiating with the BJD, which is also being wooed by the BJP. Modi recently effusively praised BJD chief Naveen Patnaik for the state’s preparedness during a deadly cyclone.

The BJD says it will take a call after the results.

Telangana Rashtra Samithi: The eight-biggest party has 11 seats and is exploring the possibility of forming an alliance of regional blocs, keeping both the BJP and Congress out.