People Across Country Divided By Culture, United By Chants For Modi: Amit Shah 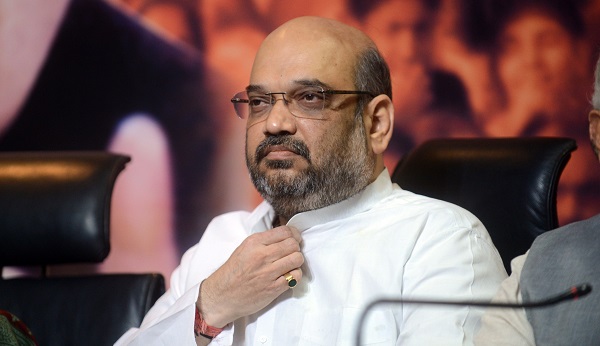 Addressing a rally here, Shah said the Congress could not do in 55 years what the Modi-led government did for the welfare of the poor in five years (Photo: RAVEENDRAN/AFP/Getty Images).

ASSERTING that the BJP will be re-elected to power in the ongoing Lok Sabha elections, BJP chief Amit Shah Wednesday (8) claimed that people in this country were divided by tastes and culture, but united by their chants in favour of prime minister Narendra Modi.

Addressing a rally here, Shah said the Congress could not do in 55 years what the Modi-led government did for the welfare of the poor in five years.

“I have visited almost all states for my election campaigns. People across the country have different tastes and culture. What is common everywhere is the chants in favour of Modi,” he stated.

Taking a dig at Rahul Gandhi, the BJP president said the Congress president goes on vacations as soon as the temperature starts soaring during summer.

“On one hand, you have Modi, who did not take a single leave in 20 years. On the other, you have Rahul Gandhi, who goes on long vacations to places, leaving his mother worried about his whereabouts,” he stated.

Shah also said people have been looking for a “leader, who would dedicate his life for the country, not serve the interests of his family”.

“What the Modi-led government did for the welfare of the poor in five years, the Congress could not achieve it in 55 years,” he insisted.

Iterating that the infiltrators will be thrown out of the country, once his party comes to power again at the Centre, he said, “When NRC implemented to drive out intruders, who are like termites, Rahul baba and company raised the issue of human rights. I would like to ask them when innocent jawans were killed and their families suffered, where was their concern?”

Talking about the NDA dispensation’s development initiatives in Jharkhand, the BJP boss said it was his government that opened medical colleges in Hazaribag and Dumka, set up a cancer hospital in Ranchi and launched a 4000MW power plant at Patratu.

“In the 13th Finance Commission, the UPA government had allotted Rs 55,253 crore for the development of Jharkhand. The Modi government has given a sum of over 3 lakh crore to the state in five years,” he added.