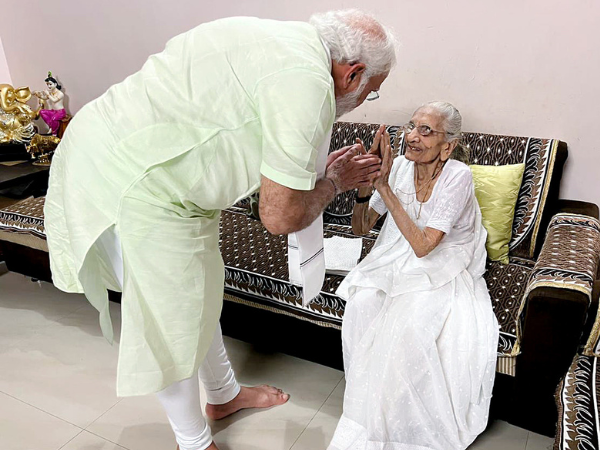 PRIME MINISTER Narendra Modi’s mother Hiraba Modi will enter the 100th year of her life on June 18, her family members said on Wednesday (15).

The prime minister, who will be in Gujarat on that day, is likely to meet her, official sources said.

Religious programmes will be organised in Vadnagar, PM Modi’s hometown, for the long life and health of his mother, her family said.

PM Modi will be on a day’s visit to Gujarat on June 18 when he would be visiting the Pavagadh temple and later address a rally in Vadodara.

Officials said he was likely to meet his mother, who lives in Gandhinagar with Pankaj Modi, during the visit.

The Modi family has also planned a ‘bhandaro’ (community meal) at the Jagannath temple in Ahmedabad on that day.

Hatkeshwar Mahadev Temple in Vadnagar has organised various religious programmes for the long life and health of the prime minister’s mother, it said in a release.

The programmes will include a Bhajan Sandhya, Shiv Aradhna and Sundarkand Path.

Modi had last visited his mother in March.