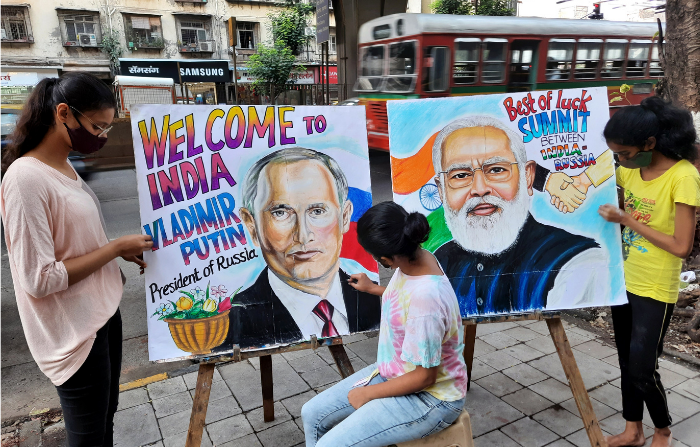 Students paint a portrait to welcome Russian president Vladimir Putin ahead of his visit to India, in Mumbai on December 5, 2021. The students also made the portrait of Indian prime minister Narendra Modi. (ANI Photo)

RUSSIAN president Vladimir Putin was set to arrive in India on Monday (6) in what will be just his second foreign visit in times of the pandemic and his trip to India is aimed at bolstering military and energy ties between New Delhi and Moscow, two time-tested allies.

However, India in current times has also seen a sound relationship with the United States which has also courted it in its strategy to counter China. Washington, for instance, has formed the Quad platform with India, Australia and Japan and that has raised concerns in China and Russia, known to be America’s rivals.

India was particularly close to the erstwhile Soviet Union in the times of Cold War and the relationship endured with New Delhi describing it as a “special and privileged strategic partnership”.

In a virtual summit in September, Indian prime minister Narendra Modi told Putin, “The friendship between India and Russia has stood the test of time. You have always been a great friend of India.”

Experts feel the visit of Putin buries speculation over India’s relationship with Russia in the current times.

Nandan Unnikrishnan from Observer Research Foundation, a think-tank in New Delhi, told AFP that the Russian president’s visit is “hugely symbolic”.
“There has been a lot of speculation about the nature of the India-Russia relationship and whether it is fraying because of Russia’s closeness with China and India’s with the US, but this visit puts all that to rest,” he said.

However, Putin’s Russia also has to deal with complex regional dynamics, particularly with tensions mounting between India and China, which also has been an ally of the Kremlin, after the deadly clashes in the Himalayas.

“Russia’s influence in the region is very limited,” Tatiana Belousova of OP Jindal Global University in Haryana told the news outlet, “mostly because of its close ties with China and unwillingness to act in dissonance with the Chinese regional interests”.

Putin’s visit to India will see talks dominated by issues related to defence and energy, AFP added. Igor Sechin, the chief of Russian energy giant Rosneft, was also attending the key moments of the high-profile visit since a “number of important agency agreements” were on the table.

Russia has also been a key supplier of arms to India, which is aiming to modernise its armed forces, and one of the most talked-about arm deals between the two nations is over the long-range S-400 ground-to-air missile defence system.

The deal was signed in 2018 and despite a threat from the US to impose sanctions under its Countering America’s Adversaries Through Sanctions Act (CAATSA) which aims at containing Russia among some other nations, India has gone ahead with the $5 billion-military hardware pact and the deliveries have reportedly begun.

The US state department recently said that no decision has been taken over giving a waiver to India.

“It is quite remarkable that India still decided to go ahead with the S-400 deal, despite the US disapproval,” Belousova said.

India is also eyeing to raise its domestic production and has launched a joint venture with Russia to make AK-203 assault rifles.

The leaderships of the two countries generally hold annual summits but their last in-person meeting was on the sidelines of the 2019 BRICS Summit in Brazil.

“The leaders will review the state and prospects of bilateral relations and discuss ways to further strengthen the strategic partnership between the two countries,” India’s ministry of external affairs said in a statement in November.

The two countries’ foreign and defence ministers held talks on Monday ahead of the Russian president’s arrival in India.