Queensland Premier Calls For Time-frame On Adani Coal Mine Approvals 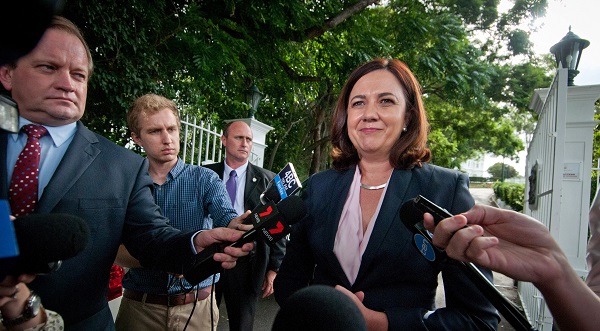 Speaking at a press conference, Queensland premier Annastacia Palaszczuk announced she would appoint her coordinator-general to oversee approvals of the mine (Photo: Robert Shakespeare/Getty Images).

The premier of Australia’s Queensland state on Wednesday (22) asked India’s energy giant Adani to sit down with the environment regulator to work out a “definitive time-frame” to obtain approvals for its controversial coal mine project in the state.

It comes days after Labor suffered a poor voter turnout across the state in the federal election, which has been widely attributed to the party’s position on Adani’s Carmichael mine project.

The move also comes after Queensland Government ministers spent weeks saying the Department of Environment and Science (DES) would not be rushed on making decisions.

Adani group entered Australia in 2010 with the purchase of the greenfield Carmichael coal mine in the Galilee Basin in central Queensland, and the Abbot Point port near Bowen in the north.

The massive coal mine in Queensland state has been a controversial topic, with the project expected to produce 2.3 billion tonnes of low-quality coal.

In addition to its impact on climate change, environmentalists have argued the mine could do serious damage to Great Barrier Reef World Heritage Area.

Another major concern about the environmental impacts of the proposed mine has been that it would wipe out the most important habitat of the threatened black-throated finch.

Speaking at a press conference, Queensland premier Annastacia Palaszczuk announced she would appoint her coordinator-general to oversee approvals of the mine.

“I’m asking for the two parties, Adani and the independent regulator (DES) to sit down with the Coordinator-General and I want them to meet tomorrow actually. I want them to sit down and work out a definitive timeframe on decisions around these reports. We’re up for this challenge, we work every day focusing on jobs,” she added.

“We need some certainty and we need some time frames – enough is enough,” she said.

Adani is currently waiting on approval of two of its environmental management plans – one concerning the black-throated finch, the other related to the management of groundwater at the site.

Last month, the Federal Government granted its final environmental approvals for the project days before the election was called.

“I’m encouraged to hear that the Premier’s finally said enough is enough, but the reality is what we’ve now got is simply another process,” Dow said.

“If these approvals are not provided within the next two weeks, this new process that the Premier has described is simply nothing more than a further political delaying tactic.”

Dow said the mining company was ready to begin construction as soon as the project was approved.

“We think it’s more than reasonable that this gets wrapped up in the next couple of weeks – the process has been exhaustive, and the scrutiny has been appropriate,” he said.

“It’s now time to finalise these and allow us to get on with the job.”

Dow said that the “ball is entirely in the Queensland Government’s court”.

“We’ve written to them, we’ve provided responses to their requests on the black-throated finch, that’s now sitting with the Queensland Government,” Dow said.

Voicing support for Adani’s Carmichael coal and mine project in central Queensland, Mayor of Rockhampton council in the region has sought a “fair go” for the company.

Rockhampton Mayor Margaret Strelow said Adani should “be given the proper treatment and allowed to proceed, for the Galilee Basin to open, for those jobs to flow so that we as a community can start to build a long-term future”.

“Queensland Labor intends to fast track Adani’s approvals for the Carmichael Coal project. This says to me that they’ve quite devastatingly really misinterpreted the results of the federal election,” he said.

“This is really unwelcome interference with the Environment Department.

“More importantly this fast-tracking of approvals for Adani is not going to help the communities she thinks it will. We need good solid planning for jobs that account for the eventual phase-out of thermal coal,” Berkman said.