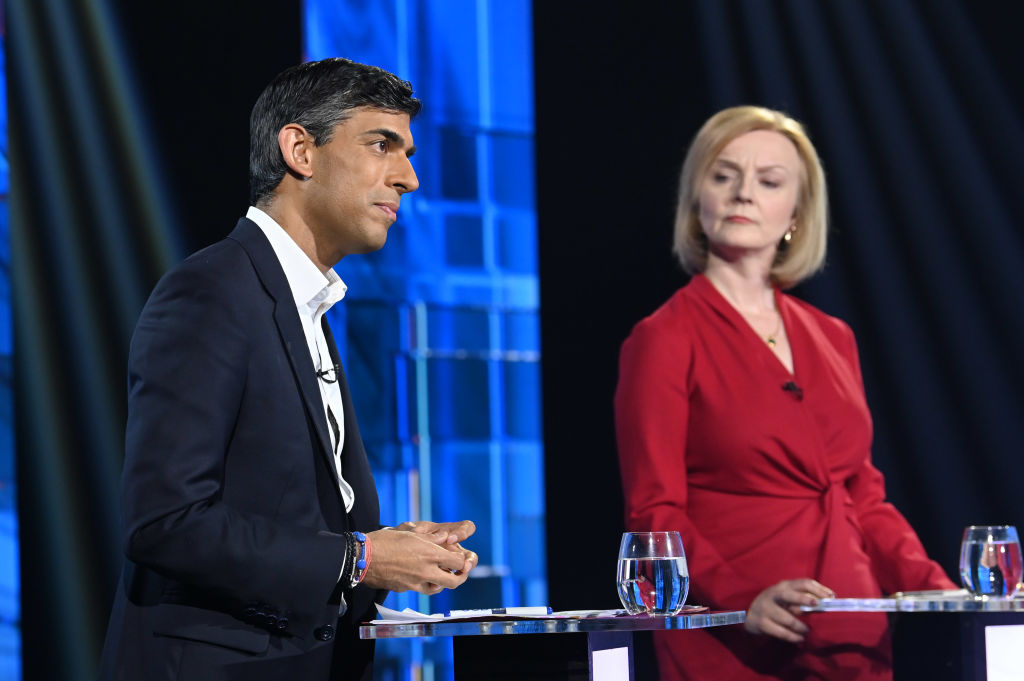 DIFFERENCES over how to revive Britain’s slow-growth, high-inflation economy could hardly be starker within the ruling Conservative Party as the two remaining contenders to become its new leader, and thereby prime minister, clash over tax.

Rishi Sunak wants continuity of the economic policies he introduced as finance minister, promising to keep his focus on fixing the public finances, despite the risk of a recession.

The former hedge fund partner, who helped to trigger the leadership race when he quit the Treasury this month, has dismissed as “fairy tales” the promises of tax cuts made by other would-be successors to Boris Johnson.

By contrast, foreign minister Liz Truss is bucking economic orthodoxy by saying her expensive plans to reverse most of Sunak’s tax increases would lower, not fuel, surging inflation.

“This certainly represents a genuine choice for those who will elect the next prime minister,” the Institute for Fiscal Studies, a non-partisan think-tank, said.

So far there is no clarity on whether the different stances on tax would mean less spending – at a time when services from health to defence are crying out for more money and public workers are striking for more pay – or more borrowing.

“Those pledges will have implications beyond the tax system, and these remain unclear,” the IFS said.

In an interview on Thursday, a day after securing her spot in the run-off to be the Conservatives’ next leader, Truss promised to smash what she said was failing groupthink with more than 30 billion pounds a year of tax cuts.

“We’ve had a consensus of the Treasury, of economists, of the Financial Times, of other outlets, peddling a particular type of economic policy for the last 20 years and it hasn’t delivered growth,” Truss – herself a former junior finance minister – told BBC radio.

Asked to name an economist who backed her view that cutting taxes would push inflation down, she cited only one: Patrick Minford, an early supporter of former prime minister Margaret Thatcher’s free market policies in the 1980s.

Minford was also one of the few economists who backed Brexit before the 2016 referendum, making a bold claim that leaving the European Union would make Britain’s economy bigger. Britain’s budget watchdog says the distanced post-Brexit trade relations with the EU will reduce productivity by 4% over the long term.

The grassroots Conservative Party members who will choose the next party leader – and therefore Britain’s prime minister – are only due to begin receiving their ballot packs in early August. A result will be announced on Sept. 5.

While Sunak and Truss are both talking of being bold reformers in the mould of Thatcher, they have yet to flesh out much of their policy plans.

But the clear dividing line between the two contenders, at least on economic policy, is on tax.

Sunak has said he wants to cut taxation levels in future, but only when he has got a grip on inflation which hit 9.4% in the 12 months to June and could go as high as 12% in October, according to forecasters.

The cost from inflation’s surge to the public finances was clear in data published on Thursday which showed debt interest costs – much of it from inflation-linked bonds – more than doubled from a previous record to 19.4 billion pounds in June.

While that would probably prompt a Sunak-led government to offer only limited further help to households hit by the cost of living crisis, Truss says she will order huge tax cuts to get the economy growing again.

In a recent televised debate, Sunak dismissed this as “something-for-nothing economics” and “socialism”.

“There are very, very difficult times. We need to be bold. We cannot have business-as-usual in the situation we face now,” Truss told the BBC on Thursday.

But a big break from the status quo would impact financial markets where the cost of government borrowing has picked up sharply from all-time lows hit during the coronavirus pandemic.

Analysts at Investec, a bank, said the government’s room for tax cuts or spending increases within the limits of its existing fiscal rules could easily be eroded if the economy worsens, and Truss has hinted at writing new, more relaxed rules.

“The unconditional promises of various candidates over the past week or so in the Conservative Party leadership race to bring taxes down, including the frontrunner Liz Truss, have seemed somewhat at odds with delivering a path of fiscal sustainability over the medium-term,” they said.