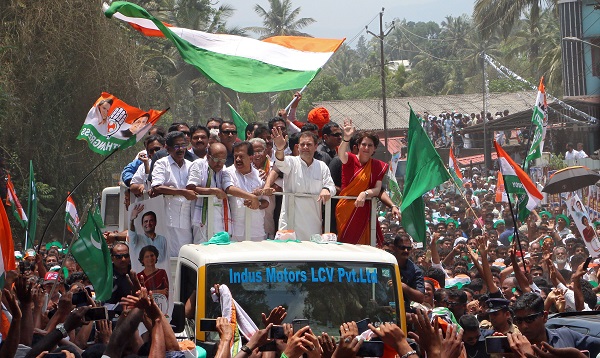 Rahul Gandhi, president of India’s main opposition Congress party, and his sister a leader of Congress party Priyanka Gandhi Vadra, wave to their supporters after Rahul filed his nomination papers for the general election, in Wayanad in the southern state of Kerala, India, April 4, 2019 (Photo: REUTERS/Stringer).

Indian opposition leader Rahul Gandhi filed his papers on Thursday (4) to run for parliament from a southern constituency, aiming to strengthen his Congress party’s prospects in a region where the ruling party has a limited presence.

Although surveys show Congress is trailing prime minister Narendra Modi’s Bharatiya Janata Party (BJP) in the elections that begin next week, the race is tightening.

Gandhi, the fourth generation of the Nehru-Gandhi dynasty that has ruled India for much of its history since independence from Britain in 1947, picked Wayanad in Kerala as his second constituency, in addition to the family borough in the north.

“I am here to send a message that south India is important,” he told reporters as thousands of party members lined the streets of the small town in welcome.

Modi’s BJP has its core base of voters in India’s north and west, playing second fiddle to regional parties across the south, except for Karnataka, home to the technology hub of Bengaluru.

But the party has been trying build its presence in the region, especially Kerala, where the Congress and a communist party are the main players, and where Gandhi is looking to galvanise party workers through his candidacy.

He was accompanied by his sister, the charismatic Priyanka Gandhi Vadra, who plunged into active politics in January in another move Congress hopes will add momentum to its campaign.

Gandhi said his candidacy emphasised the unity of India and contrasted with the Hindu-first vision of the nationalist Rashtriya Swayamsevak Sangh that Modi was tied to.

“There is a feeling in south India that the way the government, RSS and Narendra Modi are working… many people in the country feel that their culture, language and history are under attack,” he added.

Congress has accused Modi and aligned right wing groups of pursuing a partisan agenda of attacking Muslims and changing school textbooks in efforts to shape the national identity to reflect their view, that India is a nation of, and for, Hindus.

The BJP denies bias against Muslims, but says it opposes appeasement of any community. Muslims account for 14 per cent of India’s population of more than 1.2 billion, which is almost 80 per cent Hindu, census data shows.

Indian election rules allow candidates to run for more than one seat in parliament. But the BJP was quick to attack Gandhi for running in two constituencies, saying he was not sure he would win.

However, Modi himself ran from two constituencies in the 2014 election, Varanasi in the north and Vadodara in his western home state of Gujarat, carrying both.