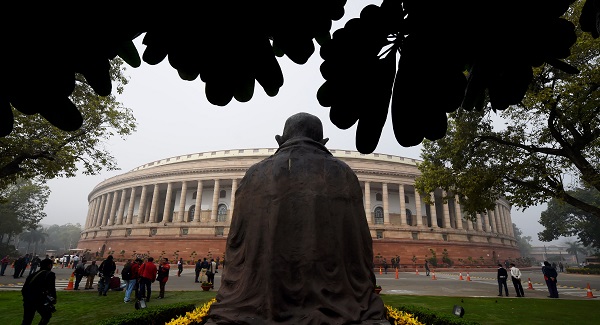 At least five transgender candidates are standing in the national election that begins on Thursday (11) in what activists say may be a turning point for the community, historically one of India’s most marginalised (Photo: MONEY SHARMA/AFP/Getty Images).

When Sneha Kale filed her nomination as a candidate for India’s general election this week, she was with a lone supporter – a stark contrast to the cheering crowds and camera crews that usually accompany politicians in the world’s biggest democracy.

The transgender 27-year-old knows she is outgunned in the campaign for election to the national parliament.

But she resolved to stand anyway, buoyed by a determination to stick up for the marginalised people that have offered their support, and a growing appetite among her community for participation in politics.

“I have the support of the weak and the marginalised,” said Kale, who is standing as an independent candidate, as she stuck fresh passport photos onto her application form.

“I am pitted against strong candidates. They come from political families. But I have a connect with my community and those on living on the margins like sex workers, bar dancers and widows of farmers,” she said.

At least five transgender candidates are standing in the national election that begins on Thursday (11) in what activists say may be a turning point for the community, historically one of India’s most marginalised.

Although the numbers appear small – no official figures are available – campaigners and parties say participation has grown since 2014, when Bharathi Kannamma became the first transgender candidate to stand in a general election.

“Two or three people from the transgender community have fought elections in the past and I think they have paved the way for the whole LGBT community into politics,” said Harish Iyer, a prominent LGBT+ rights activist.

“I am really glad there are far more transgender candidates in this election,” added Iyer, who this week announced he was joining the opposition Congress party.

India has about two million transgender people, according to the 2011 census.

Transgender women, sometimes known as hijras, were worshipped as demi-gods for thousands of years in India, but they are often shunned, with many surviving through begging or sex work.

In 2014 the Supreme Court officially recognized transgender people as a third gender with equal rights under the law.

More recently, a Transgender Persons Bill passed by the lower house of parliament despite warnings from activists that it could leave people vulnerable to abuse has galvanised the community into seeking better representation.

Many transgender people oppose the bill, which has yet to pass through the upper house, because it denies them the right to self-certify in their new gender.

Instead it proposes that a “screening committee” of experts issue identity certificates.

The bill also provides for more lenient sentences for sex crimes than currently exist for similar crimes against women.

“I think there has been a fair degree of mobilization of the transgender population to protest the transgender bill,” said Anindya Hajra, an activist with the Pratyay Gender Trust who is herself transgender.

“They have a political mandate that they have put together. This is a beginning. Earlier, we did not see it to this extent.”

Both main parties – the ruling Bharatiya Janata Party (BJP) and the main opposition Congress party – have included transgender issues in their election manifestos, with Congress promising to scrap the bill.

In another sign of growing political inclusion, India’s main opposition party this year appointed a transgender journalist and activist as general secretary of its women’s wing.

Another party, the Aam Aadmi (Common Man) Party, is fielding a transgender candidate in the north Indian city of Prayagraj, previously known as Allahabad, in the upcoming election.

The party said it had chosen Bhawani Maa for her past work on issues including women’s rights.

“We need to normalise the fact that there are different kinds of people,” said spokeswoman Preeti Sharma Menon. “The question of transgender should not arise.”

Kale, who left home at 17 after falling out with her family, said many battles still lay ahead for India’s transgender people.

“So many rapes of transgenders go unreported,” she said. “Are we not human? We are still not accepted in our homes.”