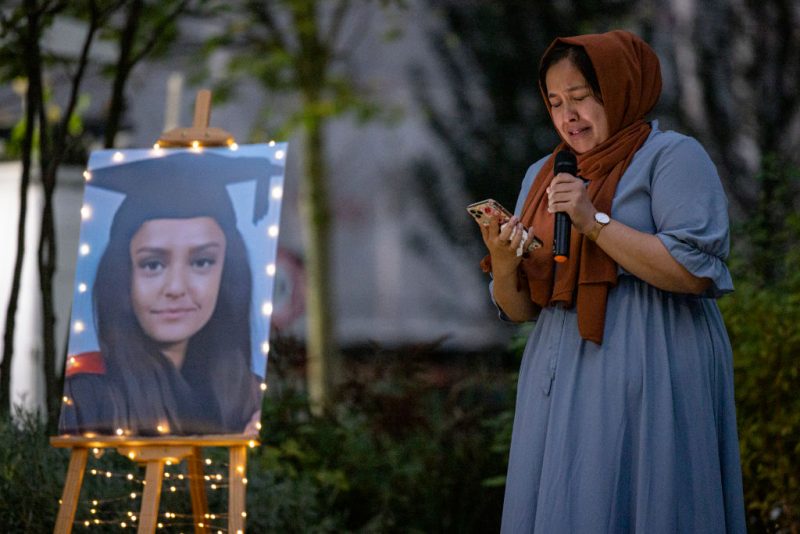 Primary school teacher Sabina Nessa‘s parents told her killer that ‘he had no right to touch her’ after he refused to face them in court.

Koci Selamaj, 36, beat and strangled Nessa, 28, as she walked through a park in Kidbrooke, south-east London, on 17 September. He refused to leave his cell for sentencing at the Old Bailey today.

Nessa had left her home to meet a friend at a bar when she was targeted by Selamaj. She had been walking through Cator Park when she was attacked.

“As a parent, you would never have thought your child would die before you,” Nessa’s parents Abdur Rouf and Aziban Nessa said in a victim statement read out in court.

“You had no right to take her away from us in such a way. Our world shattered into tiny pieces and these pieces cannot be put back together.

“How could you do such a thing to an innocent girl walking by, minding her own business.

“You are not a human being, you are an animal. Did you really think you wouldn’t get caught?

Selamaj had no previous convictions and he also took a rolling pin to the murder scene.

At an earlier hearing, prosecutor Alison Morgan QC said that the killing was carried out with ‘extreme violence’ and involved a sexual or sadistic element.

The court heard that CCTV showed Selamaj had spotted Nessa and checked to see if there was anyone else around.

Selamaj ran towards his victim and struck her 34 times using a metal traffic triangle, before carrying her away unconscious and strangling her in the park. He later disposed of the weapon in a river on his way back to Eastbourne.

During the hearing it was revealed that he had previously been violent towards his former partner, putting his hands around her throat in a strangling motion.

Nessa’s sister Jabina broke down in tears as she spoke of the pain of not being able to hold her sister again.

“Sabina had every right to be walking down the path and enjoying herself,” she said in court.

“She had the right to feel safe. You are an awful human being… what kind of human being does this?”

“You are an awful human being and do not deserve your name to be said. You are a disgusting animal.

“I would do anything to hold her one more time. Knowing our sister won’t walk through our mum’s front door again breaks us.”

Selamaj put his plan into action by booking a room at the five-star Grand Hotel in Eastbourne, three days before. Though his reservation was for the night of 17 September, he arrived earlier in the day to check-in.

Prosecutors said Selamaj had initially been driving around Brighton ‘looking for someone to have a sexual encounter with’ before abandoning the idea to head to London.

He was captured walking through the lobby wearing the same clothes as the suspect later spotted on CCTV in Kidbrooke. His car was tracked by ANPR cameras and evidence was gathered to identify his movements from Eastbourne to London.

Selamaj appeared after 10 minutes to pick up pieces of the weapon that had broken on the ground and then moved back to the area the deceased was located for another 10 minutes.

He was arrested on 26 September in Eastbourne. He faces life in prison after pleading guilty to the murder.

Justice Sweeney said the “inevitable” sentence would be life in prison, with a starting minimum term of 30 years.